Elections exclusive: How will Pakistan vote? 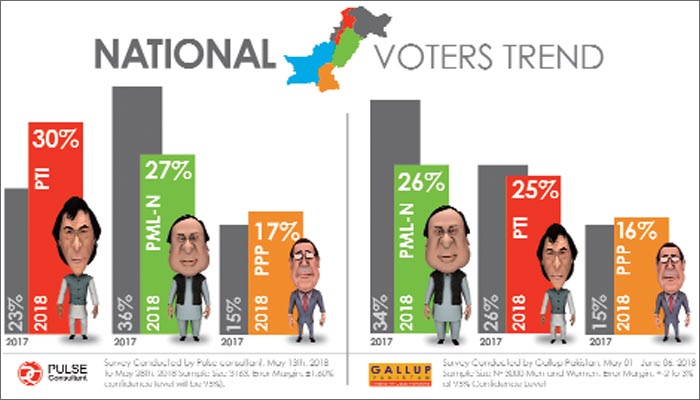 Gallup Pakistan (national), Pulse Consultant (national) and IPOR (provincial) polls show that PML-N remains the preferred party among voters in the largest province, but PTI has gained ground and narrowed the gap significantly. PTI remains the dominant party for voters in KPK, while PPP is ahead in Sindh. Balochistan, there is a three party mix. Nationally polled respondent in the Gallup poll shows PML-N ahead, while the PTI has taken the lead in the Pulse survey. Undecided voters to play decisive role in polls.

Two nationally and one provincially conducted polls have found voter preference in Punjab, Khyber Pakhtunkhwa and Sindh to have remained unchanged, staying with the same political parties elected to power in 2013. In Balochistan, voter preference varies between polls. On the national level, polls show that the Pakistan Tehreek-e-Insaf (PTI) has gained ground on the Pakistan Muslim League-Nawaz. While the PML-N is ahead according to the Gallup poll, the party has lost popularity. The Pulse survey reveals that the PTI is the preferred party for voters across the country.

Surveys also found that undecided voters have emerged as a key battleground for political parties. Gallup poll shows this group to be at 20% as compared with 26% of respondents who would vote for the PML-N and 25% for the PTI at the national level. In the Pulse poll, the undecided voter group stands at 9% forming the fourth largest block after PTI at 30%, PML-N at 27% and PPP at 17%.

Results of the surveys may vary from those conducted in November 2017 as several key political developments have taken place in the country. The government fell in Balochistan in January while the Senate elections were held in early March without the official presence of the PML-N due to a technicality as a result of the ruling by the honorable Supreme Court detailed judgment against former prime minister Nawaz Sharif. In early May, politicians associated with the PML-N from South Punjab left the party, joining the opposition PTI. In the same month, Nawaz Sharif gave an interview perceived by many as controversial.

National voting preference showed the PTI gaining ground on the PML-N in the Gallup survey and moving ahead according to Pulse. While the Gallup survey still had the PML-N as the leading party for voter preference, it witnessed an 8% decrease from 2017, with 26% of respondents saying they would vote for the party in 2018. Voter preference for PTI was 25%, which was 1% decrease from 2017. 16% of respondents said they would vote for the PPP.

In Pakistan’s most populous province of Punjab, which has the highest number of National Assembly seats, the PML-N remains the preferred party of voters. However, PTI has gained ground and narrowed the difference with its political opponent. According to the Gallup survey, 40% of respondents said they would vote for the PML-N in the province in 2018, a figure which was 10% less when respondents were asked the same question in 2017. The Pakistan Tehreek-e-Insaf (PTI) had 31% of respondents voting for the party in the 2017 poll, a number which fell to 26% in 2018. The Pakistan Peoples’ Party (PPP) saw an increase of 1%, with 6% respondents stating they would vote for the party in 2018.

Findings of the Pulse survey revealed that although the PML-N remained the preferred party among voters in Punjab, its popularity had fallen 12% since 2017. In the 2018 poll, 43% of respondents said they would vote for the PML-N which was 55% in 2017. The PTI gained 14% points among voters, with 34% of respondents voting for the party in 2018, compared to 20% in 2017. Fewer voters also favored the PPP, with the party’s preference among voters in Punjab falling to 5% from 7%.

A third poll conducted by the Institute for Public Opinion Research (IPOR) focused on 141 National Assembly constituencies in Punjab. The survey conducted from April 15 to June 2, 2018, revealed 51% of respondents voting for the PML-N, 30% saying they would vote for the PTI, and 5% choosing the PPP.

In Khyber Pakhtunkhwa, the PTI gained popularity among voters in 2018, with 57% respondents polled by Gallup stating they would vote for the PTI, up 10% from 2017. The survey found 9% of respondents voting for the PML-N compared to 10% in 2017. The JUI-F and ANP had 6% respondents each in 2018 cast their ballot for the parties.

In Sindh, the PPP remained the most preferred party. The Gallup poll found no change in voter preference for the party from 2017 and 2018, with 44% still stating they would vote for the PPP. The PTI’s popularity among voters remained unchanged at 9%, while 7% fewer respondents said they would be voting for the PML-N in the province.

There was a shift in preference in Balochistan, with the PML-N falling out of the top three in both Gallup and Pulse surveys. The main factor contributing to this significant decline was the government of the province being dissolved in January.

The Gallup poll findings in the province showed 23% of respondents voting for the JUI-F which was a 10% increase from the November 2017 poll. The PPP also saw its popularity increase among voters with 20% preferring the party compared to 7% previously. The popularity for the PTI remained unchanged at 5%.