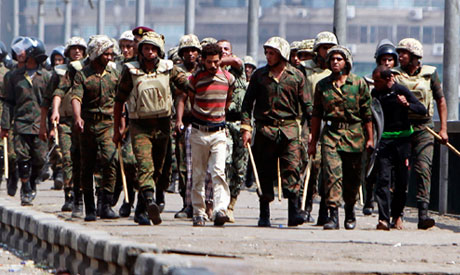 The decision of Egypt’s Supreme Administrative Court on Tuesday to nullify the recent decree enabling military police to arrest civilians is a positive step towards the anticipated end of the military rule, and also limits the highly controversial powers of the temporary junta that were notably magnified of late, said various legal and political experts.

Many critics believe that the ruling Supreme Council of the Armed Forces (SCAF), which assumed power on an interim basis after the ouster of ex-president Hosni Mubarak in 2011, has gained unfettered authority as a result of a host of recent court verdicts and decisions.

After they dismantled the People’s Assembly (the parliament’s lower house) pursuant to a court verdict stipulating that the law governing last winter’s parliamentary elections was unconstitutional, the military rulers took on legislative powers that will last until a new parliamentary chamber is elected.

Later on June 17, the last day of the presidential runoffs which led to the Muslim Brotherhood’s Mohamed Morsi being declared president-elect, the ruling junta made another controversial move by introducing an ‘addendum’ to last year’s Constitutional Declaration, a move that also gave the military body more powers at the expense of the president’s, and more legislative powers.

The articles of the amended Constitutional Declaration put the SCAF in sole charge of the armed forces and its affairs, including selecting military leaders such as the defence minister. The president will also not be able to declare a state of war or order the deployment of troops, even to contain domestic disturbances, without the military council’s consent, according to the terms of the constitutional addendum.

Politically, the SCAF has the authority to appoint a new Constituent Assembly tasked with drafting a new constitution, should the current assembly be dismantled.