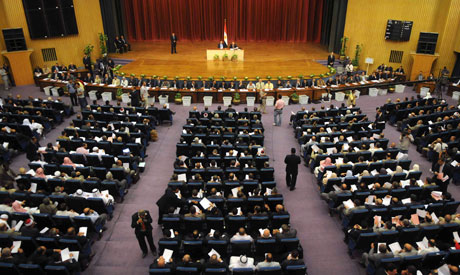 Egypt’s Supreme Administrative Court on Tuesday delayed its rulings on two controversial cases: one on the dissolution of parliament, delayed to 7 July; and the other on the constitutionality of the constituent assembly, delayed to 1 September.

Following the decision, Egypt’s ruling Supreme Council of the Armed Forces (SCAF) ordered the dissolution of parliament, a move which is now being challenged in court.The court ruling also threw the legitimacy of Egypt’s controversy-dogged constituent assembly, tasked with drafting a new constitution, into doubt.

Last week, the SCAF issued an ‘addendum’ to last year’s Constitutional Declaration (issued in the wake of last year’s revolution) giving them the power to dissolve the constitution-drafting body if it ‘encounters an obstacle that prevents it from completing its work’ [Article 60B] and draw up a new assembly in its place. SCAF members later declared that this article of the addendum had been issued in case the constituent assembly was found unconstitutional following the dissolution of parliament.

The Muslim Brotherhood, whose Freedom and Justice Party is the largest party in parliament and whose candidate, Mohamed Morsi, won just-concluded presidential elections, has stated unofficially that it would not accept the ruling junta’s constitutional addendum or the dissolution of parliament’s lower house.

According to several leading Brotherhood members, Morsi will refuse to take the oath of office before the HCC – as is stipulated by the constitutional addendum – because to do so would amount to tacit recognition of the addendum and the HCC decision that led to the People’s Assembly’s dissolution.

Other Brotherhood members, however, have said they accept the court verdicts.

Such contradictory statements suggest that negotiations remain ongoing between the Brotherhood and the military council over the future of Egypt’s parliament.

Prominent reform campaigner Mohamed ElBaradei has said that he was mediating between the two parties with the aim of “avoiding escalation.”