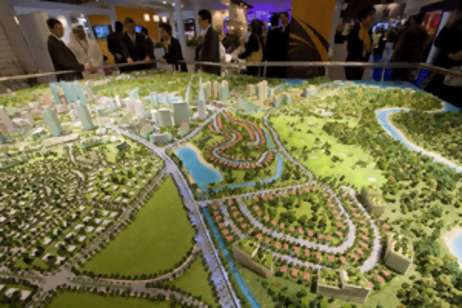 The organisers behind Cityscape in Dubai are pinning their hopes on interest from the developing world to boost delegate numbers with just over a month to go before the international property exhibition begins.Informa, the company organising the event, expects the number of delegates to increase by about 25 per cent on last year’s 17,133 as more overseas companies take part. The exhibition is at the Dubai International Convention and Exhibition Centreon October 2, 3 and 4.

Attendance at the property event has dropped off sharply since the property boom of 2008, when it attracted about 40,000 visitors in its first two days alone. The following decline in numbers prompted organisers to rethink their strategy in 2009 to encourage more international participation and to rebrand the event from Cityscape Dubai to Cityscape Global.

Wouter Molman, the exhibition director for Cityscape Global, said for the first time in the event’s 11-year history, international exhibitors would account for more than 50 per cent of exhibition space as delegates from the Iraq ministry of construction and housing, India’s Tata Housing and the developers behind Pearl Qatar take centre stage. Last year, the overseas exhibitors accounted for about 35 per cent of the floor space, or about 20,000 square metres – although Informa added not all of this was leased.

Highlights are set to include Turkey’s largestever mixed-use scheme and plans by the Russian developer Northern Caucasus Resortsto build seven ski resorts in the Caucasus mountain range by 2020.

“We are now really seeing strong results of our repositioning strategy and, as emerging real estate markets continue to grow, we look forward to adding even more international pavilions in years to come.

“Of course the numbers have fallen significantly since the boom, but what we are seeing now is that the people attending the event tend to be real estate professionals and end users. “We are seeing a more targeted and professional audience. Now we expect sustainable growth combined with a pick-up in the real estate industry,” he said.

Dubai’s property market is showing signs of revival after four years of price falls and stagnation. Last week Dubai’s Land Department reported land prices in the emirate had risen by an average of 10 per cent over the past year.

During the boom years, Cityscape’s Dubai events, the biggest and glitziest of all the Cityscape property fairs, were regarded as a byword for property excess with queues of eager investors waiting to slap down deposits on unbuilt schemes.

However, with the numbers of both visitors and exhibitors and even media representatives dwindling in recent years some critics have called for the Dubai show to merge with Cityscape Abu Dhabi, which takes place each April.