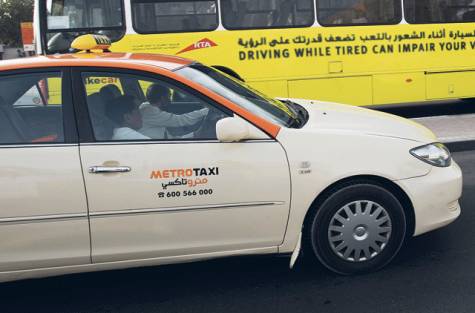 Dubai: Taxi drivers may face fines for stopping in the middle of the road to pick up passengers but Dubai cabbies and commuters complain it is not possible to use always designated stops.

They said “Taxis Only” parking bays are few and far between.

Cabs stopping on the main road are a common sight but an official said the practice can invite fines — starting at Dh300 — for the driver.

Passengers regularly flag down cabs while standing on the edge of the road, with many taxis coming to a halt on the spot.

It sometimes causes traffic disruption and can be a safety risk as well, drivers admit.

“I don’t see this [on-road taxi parking] happening in Europe. We should have enough taxi stops in Dubai and both passengers and taxis should respect that,” said Indian expatriate Adnan Farhat.

“It can be dangerous to stop in the middle of the road, it’s not right. I guess the only alternative is to use a designated stop or call a cab to a location where it can pick you up from.”

However, that is not always possible, said taxi driver Mohammad Mustafa, a Bangladeshi national.

“There are not enough taxi stops. But if the driver uses caution, he can safely — and legally — stop on the road to pick up passengers,” Mustafa added.

An official from the Roads and Transport Authority (RTA) confirmed taxis can legally make such pick ups under certain conditions, with the safety and convenience of other road users taking precedence… see more