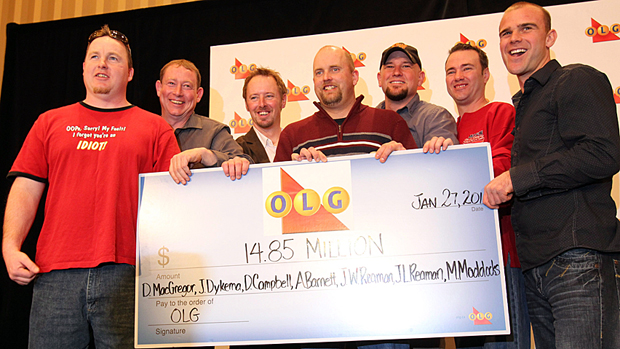 A fortuitous combination of high-tech ingenuity and the intuition of a woman at death’s door helped restore a stolen $12.5-million lottery ticket to its rightful owners.

CBC’s the fifth estate has learned exclusive details about how the rightful owners of the ticket, allegedly stolen by an insider, were found seven years after the original 2003 purchase.

Seven friends who worked together at a construction company in southern Ontario finally received their money on Jan. 27, 2011, concluding a high-profile, years-long saga.

Around Christmas in 2003, a Lotto Super 7 Quick Pick ticket was bought in St. Catharines, Ont.

That ticket, checked at a convenience store in nearby Burlington, won a free ticket — which ended up winning a $12.5-million Boxing Day draw.

Weeks later, Kathleen Chung claimed the ticket, but her win raised questions with the Ontario Lottery and Gaming Corp. (OLG). Eventually, it gave her the money.

But following a fifth estate story into insider wins and a report by Ontario’s ombudsman criticizing OLG, investigators began to probe the Chung win.
In late September 2010, Chung, along with her brother and father, who ran a convenience store, were charged with fraud and money laundering. A preliminary hearing for the case is scheduled next week.
New tool changes game

By the time the police announced the charges, the OLG had a new weapon in its arsenal to track down rightful owners of contested wins. Working with the Ontario Provincial Police, OLG turned its attention to the $12.5-million Super 7 ticket.

At a press conference announcing the search for the rightful owner, officials gave a vague description of the buyer: He or she lived and worked in St. Catharines or Burlington and usually bought several tickets, suggesting it was a group purchase.

Created in partnership with Microsoft and HP Canada, DART enabled the lottery corporation to sift through billions of transactions dating back to March 1999 in minutes.

Each time a ticket is bought, validated or even checked at a blue lottery terminal at retail locations, store terminals communicate information to a central computer system.

DART can then link tickets together based on a customer’s buying habits, creating a profile of the connected tickets as well as a profile of the customer who purchased them In the case of the $12.5-million ticket, investigators were able to connect the winning ticket to hundreds of others tickets that had been purchased over a three year period from 2002 to 2005, thereby creating a very detailed profile of who the rightful owner might be.

Investigators knew where the rightful owner bought tickets, what time of day he bought them, where he likely lived and where he worked.

“It’s a profile, and the more information you have, the easier decisions are to be made,” Rick Guzzo, the creator of DART, told the fifth estate.
Close to losing hope

After announcing the hunt for the mystery winners, hundreds of calls flooded into the OLG’s Sault Ste. Marie call centre, where a team of half a dozen people worked the phones. Call centre workers asked each of 661 callers a series of questions based on a script.

“It was actually really exciting to take those calls,” Lisa Bolduc, an OLG data analyst who fielded calls. “Honestly, every time I talked to a customer I thought, I wonder if this is the winner.”

The OLG collected the information, then passed it on to two detective constables investigating the case.

But two months in, the hundreds of phone calls slowed to a trickle and the OLG was losing hope.

Then, in late December 2010, a call came in that immediately caught their attention.
Dying sister with unusual plea

St. Catharines resident Dan Campbell had heard about the $12.5-million ticket in the news, but never thought to inquire about it himself.

But one day his sister, who was terminally ill with cancer, emerged from a semi-coma and gave him a peculiar message when he went to visit her in hospital.

“She was lethargic, but she sat up and looked at me and said, ‘Call, it’s your money,'” said Campbell. Later, she pressed him about it again, saying “Make sure you call. It’s your money.'” A day later, she died.

“I thought that I owed it to her to at least try,” said Campbell. “And that’s why I called.”

Campbell called the OLG soon after. The police almost immediately called him back, asking for an in-person interview.

His purchasing pattern matched their profile.

The three-year profile the OLG had created indicated the store where most of the tickets during that period had been purchased and it was the store across the street from Campbell’s St. Catharines house where he bought most of his tickets. It was a big clue for investigators, but they needed more.

For two days in January 2011, the police drove Campbell around southern Ontario, asking him to point out locations where he remembered buying tickets back in 2003.

“A lot of them were next to Tim Hortons because we’d go and get coffee,” said Campbell. “One guy would get coffee and I would go to the convenience store next door or the gas station and pick up a couple of tickets.” Campbell also provided employment records from his boss for 2003, and they confirmed what he had told police. At one point, he asked how he compared with others being interviewed.

“They said ‘you’re 100 per cent’ and I said ‘Is anyone close?’ and they said, ‘The next closest person is at 10 per cent.’ So then I had a pretty good idea that this was going to turn out well for us.”

Finally, on Jan. 27, 2011, all seven friends – Campbell, Adam Barnett of Grimsby, Jason Dykema of Burlington, Daniel MacGregor of Burford, Michael Maddocks of Beamsville, James Reaman of North Pelham, and Joseph Reaman of Ridgeville – collected a cheque from the OLG. It was worth a total of $14.85 million, which included seven years interest, equalling about $2.1 million for each.

After the win, a few of the men bought muscle cars, houses and other big-ticket items. All of them still go to work every day.

And some of them have continued buying lottery tickets.

“Of all people, we should believe,” Jim Reaman points out. “If anybody says, ‘Nobody wins,’ they are wrong. …We beat the odds in every way.”