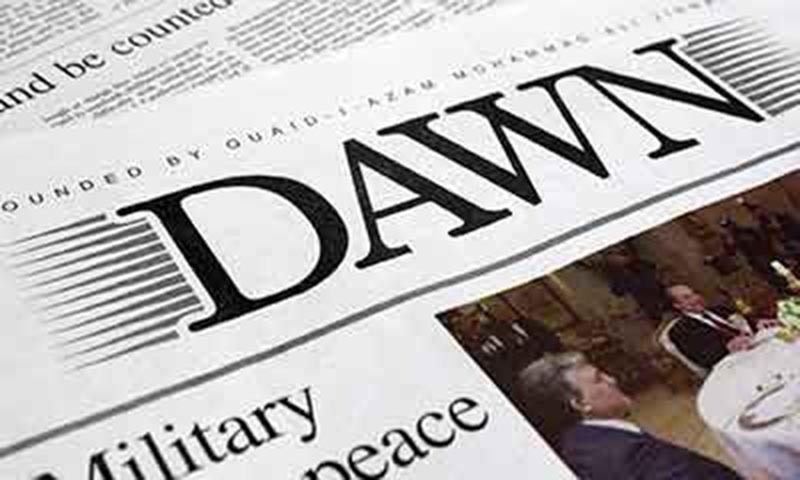 Dawn News is Pakistan’s oldest English newspaper, in fact it was founded by Quaid-i-Azam Mohammad Ali Jinnah in Delhi, India, on 26 October 1941 as a mouthpiece for the Muslim League.

Today, it is Pakistan’s most well-known newspaper and is considered an authentic, factual news source on all things Pakistani. It earned this reputation in decades, consequently it has also incurred upon itself the responsibility that it will not miss-represent Pakistan or distort its realities.

In these trying times, when the army is at war with terrorist elements and terror attacks on a war level are taking place in Pakistan’s cities, the most brutal and barbaric being the ignominious murder of more than a 100 schoolchildren in a Peshawar army school, suddenly Dawn is coming across as oddly protective of terrorists.

It has vehemently unleashed a campaign to put a question mark on military courts, these were established after a political consensus by the government and other parties.

Dawn News, most recent views on military courts were that the execution orders of 6 TTP terrorists had ‘sounded alarm bells among the country’s legal and political circles’.

It is the first time in the history of Pakistan that these Taliban mercenaries have been convicted and this newspaper has raised a ruckus in its antipathy with military courts.

It has, in a way, tried to provoke lawyers and judges to clamour against military courts, even though military courts are the need of the hour and established for just two years to control the rampant wave of terrorism.

The ‘secrecy’ of military courts irks Dawn newspaper instead of being relieved that terrorists will meet their well-deserved end.

It looks more like a studied stance determined by the newspaper to undermine the image of the armed forces, another particularly silly bit of news published in Dawn was that Inter Services Intelligence (ISI) had prepared banners accusing a senior judge of blasphemy.This allegation could never be proven but it was still news.

Not only that, Dawn is playing a very dangerous game by providing a platform to separatists. Recently, Mama Qadeer, a Baloch separatist was stopped from going abroad as his name was on the exit control list, Dawn reported the whole incident as if his demand was like that of Indian Kashmiris living under occupation.

Dawn portrays those who want separation from Pakistan as those who are asking for their rights, shouldn’t it be against the ethics of a Pakistani newspaper to avoid giving it front page space, such persons are also known as seditionists or traitors.

If the Pakistan government deems it fit to stop them from going abroad, shouldn’t Dawn avoid nominating the same seditionist as Person of the Year 2014?

Now this looks like confirmed endorsement and approval by Dawn news group for Baluchi separatist proxies.
Lately, Dawn even glorified the Indian border force BSF which keeps firing on Pakistani troops on an international border. The launch of the Indian BSF All Women Camel Safari, at BSF Head Quarters in Bhuj was highlighted and promoted with such gusto that visitors on the Dawn.com Facebook page commented that they followed Dawn to catch a glimpse of Pakistan but it looked more like an Indian newspaper.

The liberal Dawn newspaper also gives space to the miscreants of Lal Masjid and ample coverage. With overflowing magnanimity, Dawn always shows Gilgit Baltistan and Azad Kashmir as part of India on maps used in its publications. Isn’t it strange that Pakistan, s largest selling and well-known English daily does not have a correct map of Pakistan?

Lately, the Dawn news group also deemed it suitable to publish a piece by Husain Haqqani, erstwhile ambassador to the U.S, in which he asked Pakistan to abandon the Kashmir issue as it is a small pesky country and America does not need it anymore after getting a mighty ally like India. This stance is very passe and only approved by India, it is not a realistic analysis of the situation.

Also, he tries his best to give Pakistanis an inferiority complex on everything under the sun, is this sort of deliberately placed article suitable for Pakistan, s flag bearer in journalism to publish?

Dawn has responsibilities towards Pakistan too, it is not just a land where they print away anything to make money.

Dawn writes against an Islamic identity of Pakistan, running down the Two Nation Theory and questioning if Pakistan is indeed a Muslim country. I ended my subscription of Dawn newspaper five years ago, and I am glad I did, reading it gives one a depression.

Dawn also did an editorial against the death penalty because the ordinary people in Pakistan support the idea, the general public wants to see justice being done after losing 50, 000 lives to terrorism.

The Peshawar attack was Pakistan’s 9/11 and people want to see results, they want to see good winning over evil, and don’t need decorative talk about human rights of terrorists who kill babies.

Newspapers in Pakistan should represent it with sincerity and honesty, exercising caution regarding its foreign policy, its defense and its future. Is it possible for a newspaper to go against the interests of a country it is identified with and undermine the efforts of the government and security agencies in checking crime and ensuring terrorists are punished.

This is not freedom of speech, it is negative propaganda and a senseless bias, sorry to say but the next largest English newspaper Express Tribune also follows Dawn’s example.

Pakistan does not have the honest, sincere, patriotic media it deserves, each newspaper has a hidden agenda, that is why I rely on alternate media.
How can a newspaper go against what is good for the country and still claim to represent the same country?

Pakistan’s newspaper and television media need a code of conduct as they do not understand the ethos of Pakistan.

By: Sabena Siddiqi
Note: Al-Rasub is not responsible for writer personal opinion.

2 Responses to “DAWN : An Anti-Pakistan Newspaper”