Cold and flu sufferers opt for natural remedies over medication

by Newsmaster
in Health
0

OLD-fashioned cold and flu remedies are making a fashionable comeback after the worst flu season in years.

Rather than dose up on medication, sufferers are turning to the traditional remedy of hot water, fresh lemon juice, ginger and honey to combat the symptoms.

“With lemon it’s the high concentration of vitamin C and the ginger is more for when you are sick as it’s said to reduce body temperature. The honey is just to sweeten it up but it also has antibacterial properties,” said Dieticians Association of Australia spokeswoman Melanie McGrice.

“You need to increase your immunity as much as possible.”

Last month, sales of lemons increased 7 per cent at Woolworths compared with the same period in 2011, sales of honey were up 12 per cent and ginger sales rose 25 per cent.

But Alan Hampson, chairman of The Influenza Specialist Group, said there is little evidence such remedies do any good.

“These things might make you feel better but I don’t know if they are doing anything,” he said.

“By the time you get to the symptom stage, the virus has already taken a firm hold. You are not going to get an instant cure.” 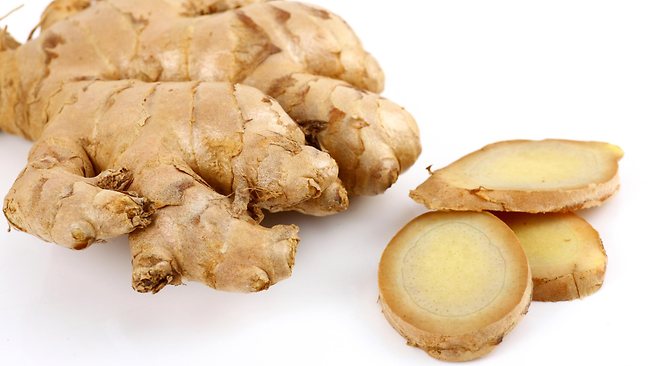 Ginger is said to help lower temperature in people with a cold and flu. Picture: Thinkstock

He said cold and flu medication would merely suppress the symptoms and could extend the illness and hot drinks might provide limited sinus relief.

“There is virtually no evidence of their effectiveness,” he said, adding that good nutrition and fitness help build a good immune system.

Hospital admissions for flu-like illnesses are steadily rising and emergency department visits are higher in most states than at this time last year.

The Influenza Specialist Group said the H3N2 and the Type B strains hadn’t been prominent in the community for a few years and could increase this season’s severity which may last until August or September, Dr Hampson said.

”My mum always said hot water, lemon and honey is the way to soothe a sore throat,” she said.

”And that’s something I do with my daughters.

”It’s always better to use natural remedies – when you look at cough lollies who knows what’s in them.”

Not just a bat, humans are also responsible for COVID-19

PERSONAL HYGIENE AND TYPES OF HYGIENE

4 Tips for a Germ-Free Home

QUARANTINE CRISIS? HERE’S HOW TO REVIVE PRODUCTIVITY WHILE SELF-QUARANTINING