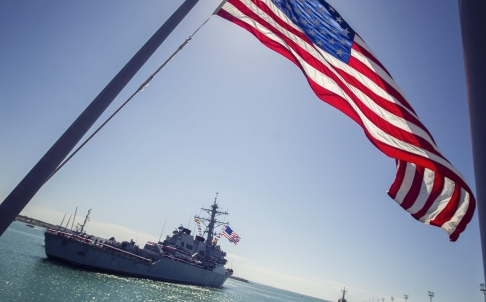 Beijing yesterday said it was “extremely concerned” that the Pentagon might send military ships and aircraft to disputed waters in the South China Sea.

Observers said that if Washington did make such a move, it could become a new flashpoint in the already volatile Sino-US relationship and overshadow talks between US Secretary of State John Kerry and Chinese officials this weekend.

“China would definitely safeguard its territorial sovereignty. We demand ‘the relevant side’ talks and acts cautiously to maintain regional peace and stability and does not take any provocative action,” foreign ministry spokeswoman Hua Chunying said.

“Freedom of navigation certainly does not mean that foreign military ships and aircraft can enter another country’s territorial waters or airspace at will.”

Hua’s comments came after reports that US Defence Secretary Ash Carter had requested options to “assert freedom of navigation” by sending aircraft and warships within 12 nautical miles of Chinese-made artificial islands in the Spratly chain.

The reports cited US officials as saying there was growing momentum within the Pentagon and the White House to take concrete steps to send Beijing a signal that the recent build-up in the Spratlys had gone too far and needed to stop.

China’s defence ministry did not comment, saying the foreign ministry had already responded.

A senior State Department official said Kerry would leave China “in absolutely no doubt” about Washington’s commitment to freedom of navigation in and flight over the South China Sea.