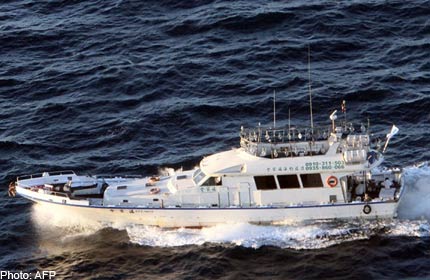 Beijing on Wednesday urged Tokyo not to take any action that could endanger Chinese lives or property, including those of Taiwan compatriots.
Foreign Ministry spokesman Liu Weimin made the remarks in response to a Taiwan fishing boat entering waters near China’s Diaoyu Islands.

The boat bumped into a Japanese patrol ship and paint was scratched, a Japanese coast guard official said. No injuries were reported.

“The Diaoyu Islands and its affiliated islands have been Chinese territory for centuries and China has indisputable sovereignty over the islands,” Liu told a news conference.

“China will continue to take necessary measures to firmly safeguard its sovereignty over the Diaoyu Islands,” he said.

According to Kyodo, an aircraft from the 11th Regional Coast Guard Headquarters in Naha, Okinawa Prefecture, spotted the boat about 37 kilometers southwest of the main island.

Japan patrol ships issued a warning to the vessel, but it kept sailing toward the islands.

Officials from Taiwan’s coast guard administration said five patrol boats have been sent to protect the boat and the nine people on it.

In Tokyo, Chief Cabinet Secretary Osamu Fujimura told a news conference: “We do not know their objective but whatever the purpose, we will definitely not tolerate the action of entering (Japanese) waters.”

Authorities in Taiwan confirmed that a boat from the island was operating near the Diaoyu Islands, but refused to accept a protest lodged by Japan over the incident, the Taipei-based Central News Agency said.

The Diaoyu Islands, a group of uninhabited islands, lie 410 km from Japan’s Okinawa Islands, about 300 km from the Chinese mainland and less than 100 km from Taiwan.

While China wishes to solve the issue through negotiations, Japan has refused to discuss it as it currently controls the islands, said Zhu Wenqi, a law professor at Renmin University of China and former member of the International Court of Justice.

China sees no need to bring the issue to an international arena since it has indisputable sovereignty over the islands, he said.

The dispute with Japan actually may help to strengthen cross-Straits ties, said Feng Zhaokui, a Japanese studies researcher with the Chinese Academy of Social Sciences.

The mainland and Taiwan share the same stance and may work together to push Japan to start negotiations and even jointly develop the region with its rich fishing and tourism resources, he said.