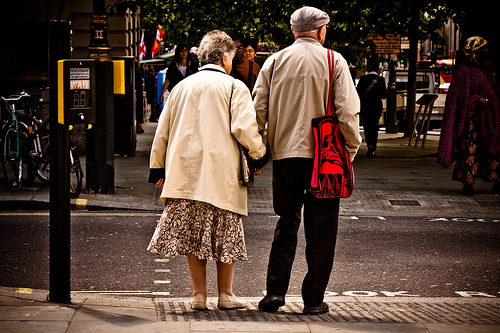 OTTAWA — Look to your left and look to your right, Canada. Get used to what you see. More grey hair, and more Canadians living in retirement. Canada is slowly but surely becoming a nation of older people.

The demographic trends were confirmed Tuesday, as Statistics Canada released the latest batch of data from its 2011 census. Back in 1971, eight per cent of us were 65 and older.

Last year, as the first wave of baby boomers reached the milestone, the proportion was 14.8 per cent. That’s nearly 5 million seniors (4,945,060, to be exact) out of 33.5 million Canadians. There were 5,825 Canadians who have reached their 100th birthday — centenarians — and the number is projected to steadily rise to a whopping 78,300 in the next 50 years.

All the while — and here’s a surprise — there’s a mini-baby boom happening in this country. The population of children aged four and under increased 11 per cent between 2006 and 2011 — the highest growth rate for this age group since the late 1950s and early 1960s.

But make no mistake — even this development won’t stop the inevitable change to the face of Canada where, within two decades, it’s expected that 22.8 per cent of us will be 65 and older.

Consider this: In 1961, when the baby boom hit its peak, 34 per cent of the Canadian population was aged 14 and under. (School construction was the order of the day). By last year, that share dropped to 16.7 per cent.

Finally, another set of numbers: After the First World War, in 1921, Canada was a young country in both its history and people. Only 4.8 per cent of the population was 65 and older, compared to 14.8 per cent last year.

Indeed, the statistics show that as baby boomers (born between 1946 and 1965) now enter their senior years, profound and often controversial questions are being raised about whether Canada is ready for the possible consequences to a declining labour force, and the increasing costs of the health care and pension systems.

Demographic experts and researchers who have studied aging populations internationally agree that Canada must now confront what lies ahead, although there is a lively debate over whether the aging population will, as some predict, lead to skyrocketing social program costs.

“I think some changes are going to be needed,” said Elaine Gallagher, former director of the University of Victoria’s Centre on Aging. “But we have time to make those changes. It’s not a tsunami. It’s not going to happen overnight. It will happen slowly over the next 30 years and we’ve got time to plan for it, to adjust.”

She said the changes are both practical and necessary: building code changes to require reinforced walls behind the shower to build a handrail; wider doors for wheelchairs; better public transit for seniors; longer lights at crosswalks, where seniors on foot are increasingly falling; and enhanced homecare programs, including assistance to help seniors with their yard work and housecleaning so they can stay in their homes.

“We really didn’t design cities for the elderly,” she said. “We designed them for able-bodied people, 35-year-old engineers who bicycle to work. A good deal of retrofitting is going to be needed.”

The census results come just months after Prime Minister Stephen Harper declared that his government will make major “transformations” to prepare for the demographic changes that he said threaten this country’s economic future.

Among the controversial policy changes now underway: future Old Age Security pension system costs are being curtailed by making seniors wait until 67 to get their benefits; health-care transfers to provinces are being cut back; immigration rules are being changed to get more skilled workers into the labour force.

Staunchly against the plan to raise the age of OAS eligibility, the NDP pointed to the latest census data Tuesday to back its argument that clawing back OAS at a time when growing numbers of people rely on it is simply unfair.

“Seniors have followed the rules their entire lives but today the Conservatives are stealing $10 billion to pay down the F-35 deficit,” finance critic Peggy Nash said during question period, noting “expert after expert” agrees the system is sustainable.

“Why are the Conservatives making tomorrow’s seniors pay for their mismanagement?”

Meanwhile, Human Resources and Skills Development Minister Diane Finley retorted that the census data clearly supports the government’s claims — and those of a number of other experts she rhymed off — that Canada’s population is “aging faster than before” and that OAS is “not sustainable in the long run.”

The latest census data ultimately shows a looming wave of Canadians approaching retirement. Among the “working-age” group, a record 42.4 per cent were between 45 and 64, compared to 28.6 per cent two decades ago.

Also, for the first time, there were more people between 55 and 64, when people prepare to leave the workforce, than between 15 and 24, when people are typically about to enter the labour market.

In the provinces, the proportion of seniors was the highest on the East Coast, Quebec and British Columbia. It was the lowest in Alberta (11.1 per cent).

David Foot, author of Boom Bust and Echo, said it’s easy to predict one outcome from the aging population.

“Slower economic growth is inevitable. And that means it gets increasingly difficult for governments to get themselves out of the deficits.”

Foot said governments that try to confront the issue just through cutting costs are short-sighted.

“If we’re going to try and get rid of deficits by cutting expenditures, we’re never going to make it. We’ve got to raise taxes. You’ve got to be creative. You’ve got to have new tax sources.”

He said it’s better for governments to use “all the right policies” at their disposal now.

“It takes a very brave politician to take on demographics as a long-term issue because the paybacks are not going to be within their electoral cycle.”

Foot warned that signs of discontent among Canadians from different generations are already showing. Boomers have seen their stock-market savings plunge while low-interest rates make it difficult for them to grow their investments. Workers in their 40s are stuck in their career paths because the boomers can’t afford to retire. And younger Canadians, in their 20s, can’t find entry-level jobs to get started out.

What happens if we don’t prepare for this growing problem?

“People are rising up here because of rising income inequality,” said Foot, warning it will only get worse.

Doug Norris, chief demographer at Environics Analytics, said the business sector also needs to gear up for the change — not just in the workforce, but also in the evolving preferences among older consumers.

“Older people might decide to spend their money travelling a lot more. They may decide to downsize their house. There are big impacts potentially for the real estate industry.”

So what will Canada look like in two or three decades? Just look to Europe, said Norris, where the proportion of seniors is higher than Canada’s.

“When I look at Europe today, it’s vibrant, it’s moving. It’s not as if everyone’s in the rocking chair and nothing is happening.”