Can You Correct Rather Than Pointing 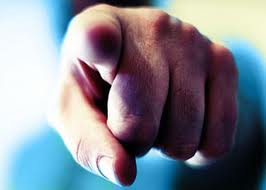 The most common problem with our people is that they act less and cry more. Blaming others for a certain loss is easier than bearing criticism on ourselves. It is more convenient to raise fingers on others than to find our own mistakes. I once heard a story that I would like to narrate.

Once there was an artist. He was not quite famous rather an amateur. He made a large painting by working hard through days and nights. He had no access to any art gallery so that people may visit and give him some feedback. An idea struck him and he hung the painting on the end of the alley with a note. The note said “PLEASE MARK THE MISTAKE” and he left. The next day, he came back and saw that the whole painting was marked black. He got disheartened and went grief struck to his father. When his father heard the whole story, he smiled and asked him to make the same painting again, paste it at the same place and change the notice to “PLEASE CORRECT THE MISTAKE”. He did and found that there was no mark on the whole painting at all.

This is exactly the case with our nation. Whenever our government tries to do something nice, the thing is criticized and opposed by all means irrespective of knowing the good side. For instance, Lahore Metro Bus System was initiated and was opposed at a large scale. When it got completed, most of the people are travelling and benefiting from the service but not even a single person will give you positive response about it. I admit that there may be many flaws to be corrected but the positive sides have never been encouraged. Plus, the people who accuse the government of corruption did a lot corruption in this project which is evident from the worn out route of the Metro Bus.

Most of the people of this nation, I believe, are emotional fools. They act under the flood of emotions without thinking even for a while. This is the side which can turn out to be the largest weakness and the biggest strength at the same time. The point is how things are controlled and utilized. People must think of what they are doing to the country in the first place. If they themselves are not on the right path, they have no authority to criticize the government and its policies.

Tags: article, Can You Correct Rather Than Pointing, opinion