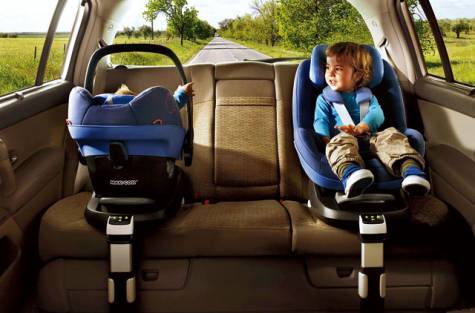 ABU DHABI // Child-safety experts yesterday renewed warnings to parents not to leave their children in cars in the summer heat.The temperature inside a car on a hot day can rise sharply above the outside temperature within 10 minutes, said Dr Taisser Atrak, head of paediatrics at Mafraq Hospital in Abu Dhabi.

“The temperature in a car can go at least 30°C above the outside temperature. Children will sweat, become dehydrated, and get heat stroke,” he said.

The warning follows the deaths of two children left in hot cars.

In the most recent incident, in Umm Al Qawain on Friday, a five-year-old Emirati girl died after being left alone for two hours while her family visited a friend. In Sharjah on June 30 a two-year-old boy died after he was left in a car for almost four hours.

Both children died in daytime temperatures over 40°C.

In a climate such as that of the UAE, the heat inside a car can be described as having the same effect as slow cooking, said Dr Peter Kew, associate head of Dubai School of Engineering and Physical Sciences at Heriot-Watt University.

Left alone in a car, a young child would not be able to fend for himself, Dr Kew said. “A child can’t open the windows or doors, and secondly, because they are small, they will heat up quicker, and very quickly become tired and lethargic.”

Dr Atrak said parents whose children die after being left alone in hot vehicles should be penalised even if no crime had been committed.

There is no specific law to punish parents whose children die in cars that overheat, but parents could be charged with negligence that leads to death. The offence is punishable by imprisonment for not less than a year, or a fine, or both. Such prosecutions are rare.

Focusing on the issue temporarily – only when it becomes a reality – has proven detrimental to putting a stop to it, said Dr Atrak.

“If we continue moving on, we never solve the problem. We need some responsibility. We should be accountable.”

The call for parents to be more watchful of their children in cars follows several deaths in recent years of children who had been left alone in vehicles for several hours.

In 2009, a four-year-old girl died of heatstroke and dehydration after she was left on a school bus in Abu Dhabi. In 2010, the Dubai Police rescue department received 85 calls about children stuck in hot cars, an average of about one every four days.

Regardless of whether a car is left in the shade or not, parents must never think it safe to leave a child alone, even for a short period, experts said.

“It makes quite a big difference, if the car is well-shaded, but it is a dangerous assumption to make. Some people will leave the car windows open, which again makes a difference, but not a life-saving difference,” Dr Kew said.

The shade will serve only to delay the process, but can still lead to the death of an infant or young child, Dr Atrak said.

As a rule of thumb, no guardian should ever leave a young child alone, in any situation, he said.

“The advice is very simple – don’t leave a child unattended at any time, anywhere, for any reason.”