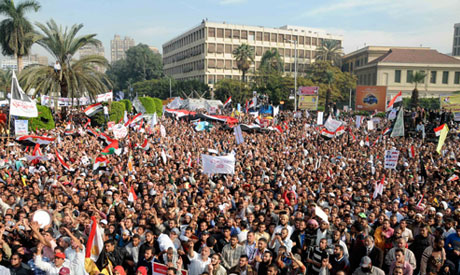 Only three days away from the second anniversary of Egypt’s January 25 Revolution, the Muslim Brotherhood has launched a

campaign dubbed ‘Building Egypt Together.’ At a press conference in central Cairo on Tuesday, the group’s secretary-general, Mahmoud Hussein, provided details of the initiative.

“Three central projects will be implemented nationwide, in addition to several projects on the provincial level,” Hussein said.

The conference began with a Quranic recitation and was followed by a brief introduction by FJP spokeswoman Dina Zakaria.

The campaign, which is set to continue until 5 February, incorporates a variety of projects. One key initiative will be to provide free health services to one million Egyptians, renovate 2,000 governmental schools and alleviate hardship by providing subsidised produce. Another initiative, highlighted by Ezzat, will aim to provide one million apartments to low-income citizens.

“Eight-hundred NGOs will work nationwide to achieve these goals, 20 of which will be located in Cairo,” said Ezzat.

FJP Secretary-General Hussein Ibrahim invited all interested parties, NGOs and civil society representatives to gather at the party’s Cairo headquarters on 5 February to begin planning the campaign’s next phase.

Some critics, however, questioned the timing of the initiative.

“This initiative is useless since it only spans one month. Charity should not be undertaken simply for electoral purposes,” said Zeinab Afifi, head of the National Orphans Federation. “This isn’t like providing food bags to the poor during Ramadan [the Islamic fasting month]. A campaign like this needs at least one year to have any impact.”

But officials from the Muslim Brotherhood and its affiliated FJP stress that the new campaign is not related to Egypt’s upcoming parliamentary polls.

“The campaign is not linked to the elections. The Muslim Brotherhood has been undertaking similar initiatives for the last eight years and the Egyptian people know this,” Mohamed Sudan, the group’s foreign relations secretary, stressed. He went on to describe the initiative as a “gift to the Egyptian people” in honour of the Tahrir Square uprising’s second anniversary.

At one point the conference was interrupted by a boy scouts troupe that performed a well-known Egyptian patriotic song. Patriotism was a major theme of the event, with the Brotherhood eager to demonstrate its willingness to unite with all interested parties regardless of organisational allegiances.

“I’m not from the Brotherhood or FJP, I’m an Egyptian. I love my country and want to help build it,” said Loay Abdel-Wahid, president of Abour City’s board of trustees, who attended the event.

Zakaria wrapped up the conference by inviting interested parties to attend an initial brainstorming session next Tuesday at 12:30pm at FJP headquarters.