Breaking the Ice: Russia and Pakistan 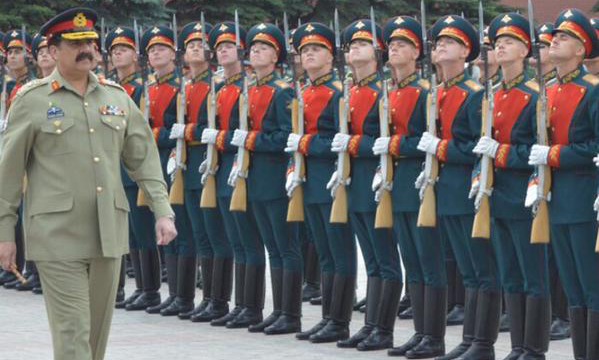 A sea-change happened in Pakistan-Russia relations ever since Gen Raheel Sharif,s visited Moscow. He discussed ways to enhance defence cooperation and more military exchanges were planned to benefit from each others’ combat experience. There are no permanent friends or foes in geopolitics, strategic interests are the only reality.

The Russia of today is the successor of the erstwhile mighty Soviet Union which once invaded Afghanistan and established government. In the 70s decade, Pakistan had good relations with the Soviet Union, they had also set up a steel mill in Karachi.

Then the Soviets invaded Afghanistan, Pakistan played a major role in defeating the Soviets, as their ultimate intent was said to be invading Pakistan as well. Today, the Russians have a different strategy, they seek deeper geo-economic ties with South Asia as a whole, in this they visualise Pakistan serving as a gateway for energy trade to the entire subcontinent.

Both Russia and China have been keen on having Pakistan as a member of the Shanghai Co-operation Organisation, Pakistan’s full membership to the powerful Shanghai Cooperation Organisation (SCO) was approved by its Council of Heads of State in its summit this year. Russia sees the organisation, expanding for the first time since its creation in 2001, as a counterweight to Western alliances.

But it is Pakistan that stands to make the most immediate gains from its membership of the SCO. Earlier this year it signed a series of landmark agreements with China, worth an estimated $46 billion, to secure investment for the China–Pakistan Economic Corridor, it has been robustly endorsed by the SCO and is expected to cement Pakistan’s role as a vital regional hub in the economic development of Central Asia, which has a strong presence in the SCO.

After incurring heavy human losses in America,s War on Terror, Pakistan feels compelled to rely on its old trusted friend China and even erstwhile adversary Russia. This is what realpolitik is all about.

Russia is willing to help Pakistan improve its economic record and it offers an alternative source of military hardware to the army. Pakistan would like to diversify military supplies as the U.S. has never made the full spectrum of arms available to us.

“Pakistan and Russia are independent of any influence from any other country.
Russia is an important country and we want to enhance relations with it in all fields of mutual interests,” the Foreign Office announced.

Pakistan and Russia relations are on an upward trajectory over the last couple of years.
Pakistan has embarked upon a policy of constructive engagement with countries in the region and beyond.

Russia is a country with thousands of nuclear weapons, substantial armed services, and ample natural resources, it has better chance of being opponent Numero Uno of the U.S.
On the other hand, US-China relations do not suggest any potential conflict considering that U.S. trade with China amounts to more than half a trillion dollars annually, which is more than ten times the level of Russo-American economic interaction.

Beijing also serves as a major creditor so the smart geopolitical move on America,s part would be to break the ice with China, while the Russian stance on the issue of US intervention in Syria for regime-change clearly suggest divergence of interests for both countries.

The Americans feel more need to contain Russia, specially with  Putin as leader, than China. Russia is the major counterweight of American power and influence.

This state of US-Russia relationship has not deterred Pakistan, the two significant visits of Pakistan’s army and air chiefs to Russia give some indications of future Pakistan-Russia relations.

Pakistan and Russian foreign ministries are in constant talks to finalise the dates for President Vladimir Putin’s much awaited visit to Islamabad and both the sides expect significant defence pacts during the visit sometime this year. Russia has read the regional and global scene afresh and recognized Pakistan’s role as a factor of peace and stability.

Analysts say that an increasingly concerned Russia wants very much to engage with Pakistan, and sees it as an indispensable regional player in dealing with whatever emerges in Afghanistan following the Nato’s complete pullout. Pakistan is indispensable for furthering the peace process in Afghanistan.

India’s ties with the United States are worrying, with Washington virtually legitimizing it as the world’s sixth nuclear weapon state, something that even Russia did not do in all those years as close allies.

Such developments are quite alarming, so now Russia and Pakistan are also looking at launching military exchanges. The defence cooperation agreement is the first of its kind between the two countries and has been described in Pakistan as a “milestone” in Pakistan-Russia relations.

This was being considered since a couple of years, Commander of the Russian ground forces, Col-Gen Alexander Postinov, had visited Pakistan to discuss the possibility of expanding defense ties by holding joint military exercises, exchanging trainees and trainers and selling and buying weapons and counter-terrorism equipment. Pakistan and Russia are finalising a deal for purchase of three dozen Mi-35 ‘Hind E’ attack helicopters.

There are plans to closely coordinate efforts to counter terrorism and narcotics. Pakistan also wants Russian assistance to stabilize chronic energy shortages. It looks like a deal has also been reached between the two countries regarding the exchange and purchase of high-tech weapons from Russia. The JF-17 Thunder fighter planes that China is supplying to Pakistan also have Russian RD-93 engines.

Russia is also willing to get involved in the 1,640 km TAPI project bringing piped gas from Turkmenistan through Afghanistan and into Pakistan and India.

Russian investors were also interested in the Thar coal project in which a large energy complex in Sindh is to produce 6,000 MW of coal-based power and pioneer the concept of gasification and production of liquid fuel from coal.

In fact, it was high time that the mistakes we made in the past, making only the U.S. an ally, were corrected. In todays world, it is important to achieve balance and have more friends than foes.