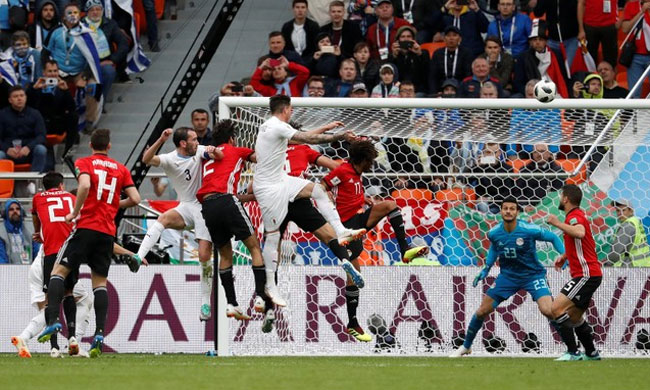 Egypt, missing the spark of Mohamed Salah but proving resolute at the back, conceded a late goal to slump to a bitter 1-0 loss to Uruguay in their World Cup opening game in the Russian city of Yekaterinburg on Friday.

The Pharaohs defended doggedly but were undone by a 90th-minute header from defender Jose Gimenez, who rose between a couple of defenders to send a bullet header into the back of the net at the death.

Egypt survived three clear-cut chances, with some inspired goalkeeping from Mohamed El-Shennawi, a novice guardian who surprisingly started instead of 45-year-old Essam El-Hadary to make his competitive debut, denying Uruguay marksman Luis Suarez more than once.

The Barcelona forward hit the side netting with the goal at his mercy in the first half after a loose ball fell into his path on the left side of the area before having a close-range shot denied by El-Shennawi after the break.

The Ahly keeper also dived at his feet to thwart him in a one-on-one situation with 17 minutes remaining and pulled off another great save to claw away a rasping shot from Edinson Cavani, earning the man of the match award.

Despite their defeat, Egypt can take positives from a solid and organized display at the back.

However, they will desperately need Salah, who was kept on the bench having just recovered from a shoulder injury, in their next Group A clash against hosts Russia on Tuesday if they are to keep alive their chances of advancing to the next round on their first World Cup appearance since 1990.

Russia top the group with three points, ahead of Uruguay on goal difference after hammering Saudi Arabia 5-0 on Thursday… see more