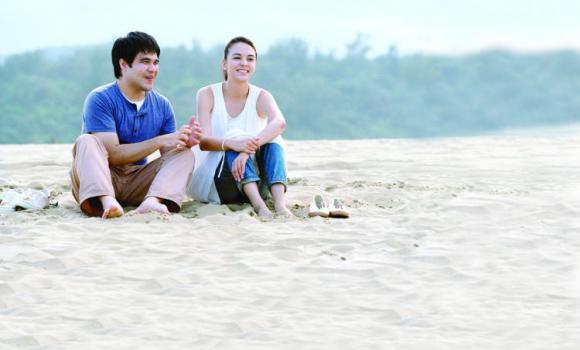 HUANG YU-SIANG WAS born with a gift and a disability. He has a huge talent for music, but he is blind. His story has become a movie that has captivated audiences in his native Taiwan.
The film, “Touch of the Light,” marks a double triumph for the 25-year-old. First he overcame awe-inspiring odds by becoming a successful pianist in real life. Then he beat the odds once more by playing himself on the big screen.
“I was surprised by the warm reactions at home and abroad. Many people told me they were encouraged by the film to persist in their dreams,” Huang said in an interview.
Huang’s musical gift was discovered at the age of two when he could play on the piano songs he had heard only once. He went on to win many competitions and became the first blind person in Taiwan to obtain a bachelor’s degree in music majoring in piano.
His story was made into a short film in 2008 by Taiwanese director Chang Jung-chi. This attracted the attention of acclaimed Hong Kong filmmaker Wong Kar-wai, who encouraged Chang to build it into a full-length feature.
It has become a top-grossing movie in Taiwan since its September release, winning over fans including President Ma Ying-jeou, who praised its “subtle character portrayals” on his Facebook page.
The film has also been welcomed by civil groups that hope it will sharpen the focus on the plight of the island’s blind.
While attitudes toward those with disabilities have improved in recent years, support groups and charities say Taiwanese society still has some way to go when it comes to equality.
Taiwan prides itself on its facilities for the physically impaired — wheelchair ramps abound in the cities — but the fact remains that blind people face drastically limited opportunities.
“The visually-impaired are a minority among the minorities, as employers are more willing to hire the physically or hearing-impaired,” said Chiang Pei-fen, a spokeswoman for Taiwan Foundation for the Blind.
“The majority of the visually-impaired are still limited to working as masseurs or in tele-marketing, and even though general workplace acceptance is improving, there is still a big gap between the number of job seekers and employers willing to hire them.” Despite his gift, Huang himself has not avoided discrimination. He said he was mocked by fellow students at school and was rejected by a junior high school music program because he could not see the scores.
The real shock came when Huang left home to attend university, where he struggled to cope, with some classmates reluctant to accommodate him.
“It was a difficult time adjusting to a new environment but I came to realize that I could not always sit back and wait for other people to come to me. I had to take the initiative to make friends,” he said.
His adjustment process and the friendships he eventually developed form the bulk of the plot in “Touch of the Light.”
The experience has transformed Huang from a “shy, introverted” boy who dared not respond to people greeting him, he said, to a celebrity musician and actor who mingled with fans and traveled abroad to promote his work.
“Acting makes me feel more confident and I have become more outgoing and more active, reaching out to other people,” said Huang, who is now a household name in Taiwan and often approached in the street by fans.
Even though the movie is based on Huang’s experiences, director Chang stressed that it is really about “pursuing dreams and breaking stereotypes.” “In the movie the character’s friends are not overly protective or treat him like an ‘endangered species’ as I want to break the sentimental pitying or worrying for the blind or other minority groups.” Huang has been nominated for the Outstanding Taiwanese Filmmaker category that encompassed actors, directors and other aspects of film at this month’s Golden Horse Film awards, regarded as the Chinese-language Academy Awards.
Chang is vying for best new director.
But the jury is still out on whether the film’s success will translate into greater acceptance of the blind into Taiwan society.
“It draws attention to the challenges visually-impaired people face but it remains to be seen how much can be translated into actual support for them,” said Chiang of the Taiwan Foundation for the Blind.