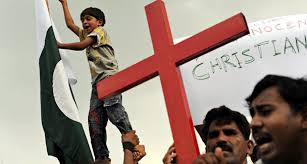 Freedom of speech is a human right but it should not hurt, abuse or provoke anyone. Blasphemy law applies when there is sufficient evidence and witnesses of someone having used derogatory terms against the Holy Quran or the Holy Prophet (pbuh) Blasphemy law cannot be done away with as Pakistan is an Islamic state and everything will be done to preserve the sanctity of Islam.

In the last few years, Pakistan, s blasphemy laws are more and more discussed in the media. There is an urgent need that the blasphemy laws be re-visited to prevent their misuse and ensure that justice is done. The law itself may not be blamed, its application without evidence and lack of understanding in the masses has become a problem.

Asia Bibi, s case in 2010 highlighted Pakistan, s blasphemy laws even more, here and abroad. Asia Bibi was working on a farm in Punjab, when her co-workers accused the Christian woman of blasphemy and insulting the Prophet Muhammad following an argument over water. She was arrested, convicted of blasphemy in 2010 and later handed the death penalty. It is said there was no proper evidence and the allegations were based on hearsay, hence it is being said to be a flawed judgement.

This case has shown an ugly face of Pakistan to the world, in today’s Pakistan there is a lot of talk about ‘ real change’ and improving the society. It is high time now that we stand up as a nation to address this matter.

Two days ago, a Christian couple was beaten and burnt to death in a kiln by a furious crowd that believed they had desecrated the Holy Quran. These individuals should be arrested forthwith and murder charges should be initiated against them. According to the local police chief, a criminal case has been filed against at least 460 people, and 48 people have been arrested so far. Vigilantes seldom have any evidence and blasphemy charges could be used as a form of revenge and a cover for crime unless there are laws to punish the accusers if proven wrong.

Vigilante justice should be discouraged and prevented, laws are required to punish such people who take law into their own hands and do serious injury to the accused. Such individuals should be punished severely as the law does not give anyone the right to carry out any form of victimization against those accused of blasphemy. If Pakistani society wants a real change, vigilante justice has to be discouraged instead of turning them into heroes.

It is wrong to say that Christians have been specifically persecuted with the help of blasphemy law. It is the Muslims that constitute a majority of those prosecuted, followed by minority Ahmadis. All Pakistanis are at risk if the law is used to settle scores or get popularity in the lesser-educated masses that are easily beguiled. Pakistani jurists and lawyers have to find out a way that the law cannot be misused and it still fulfills the requirements of Shariah law.

Although hundreds have been convicted of blasphemy, nobody in Pakistan has ever been executed for the offense. Most convictions are retracted after the accused makes an appeal. The death sentence has never been carried out in the case of blasphemy accused, there is more risk of injury from angry mobs which is why blasphemy accused are never released on bail. Once they are released, they often go into hiding or go abroad.

Amnesty International now claim the blasphemy laws being used to prosecute Mrs Bibi violate international law. Amnesty should consider facts first, Pakistan is not fond of executing any prisoners, capital sentence is handed out rather freely but not carried out at all. Even as I write there are more than 8000 prisoners on death row awaiting sentence. The last death sentence carried out was in 2012. Nawaz Sharif suspended the death penalty shortly after coming into power which may be termed a progressive sign. Zardari had a five year moratorium in place on executions since 2008 , only interrupted once in 2012 when a soldier was executed.

Blasphemy laws exist in America and European countries too since hundreds of years, there were various types of punishment in practice such as burning witches at the stake. Almost all European and other countries have Blasphemy Laws–though they are not used to prosecute anymore. Some countries have laws which give redress to those who feel insulted on account of their religion. In place of blasphemy or in addition to blasphemy in some European countries is the crime of “religious insult”. These laws forbid hate speech, the vilification of religion, or “religious insult”.

The point remains that there are limits to Free speech. In fact when British Muslims tried to invoke the UK Blasphemy Law, the courts there decided that British Blasphemy Laws only protected Christianity and other religions remained unprotected. There is a limit to ‘free speech ‘ in the British High Commission “The Abuse and Vilification (religious invective) Order No. 43 of 1929”. The order contained the language: “Any person who utters a word or sound in public or within earshot of any other person that may be or is intended to offend his religious sensitivities or faith can expect to be found guilty and eligible for a one-year jail sentence.”

A vast dichotomy exists when you view the topic of Blasphemy Law in parallel with laws against Holocaust-denial. Human rights organisations and Amnesty International do not discuss holocaust denial laws at all. Holocaust denial, the denial of the systematic genocidal killing of millions of Jews by Nazi Germany in the 1930s and 1940s, is illegal in a number of European countries. Many countries also have broader laws that criminalize genocide denial. Of the countries that ban Holocaust denial, a number (Austria, Germany, Hungary, and Romania) were among the perpetrators of the Holocaust, and many of these also ban other elements associated with Nazism, such as Nazi symbols. Holocaust denial laws are in place in seven countries, including Germany, France and Austria.The denial of the Holocaust (or the denial of genocide) is prohibited, in various ways, in at least ten European States.

In 1992, the United Nations declared that antisemitism must be recognized as a danger that must be fought against by legal means. It is illegal to question the Holocaust or ‘crimes perpetrated by Communists ‘ in most of the advanced nations. The question arises that why the same advanced nations are horrified at the mention of blasphemy law in Muslim countries yet hang on to holocaust-denial laws in the same breath. Genocide is still a term in use for whenever it harmed Western interests but not vice versa. Holocaust denial is generally viewed as ‘anti Semitic’ but Blasphemy laws are ‘draconian’ at the worst and ‘frivolous ‘ at the least for the same audience.

Blasphemy law is necessary and should be there like in every other Islamic state. No Muslim can disagree on this ,anyhow it should be properly and thoroughly investigated etc. It should not be used to blackmail or scare or blackmail anybody. Extremism is not approved in Islam and a moderate path is advocated and preferred.

The Pakistan Penal Code prohibits blasphemy against any recognized religion. Pakistan has anti-blasphemy laws in Chapter XV of Pakistan Penal Code,it deals with “offences relating to religion” §295. Injuring or defiling place of worship, with intent to insult the religion of any class. §295-A. Deliberate and malicious acts intended to outrage religious feelings of any class by insulting Its religion or religious beliefs. §295-B. Defiling, etc., of Holy Qur’an. §295-C. Use of derogatory remarks, etc., in respect of the Holy Prophet. §296. Disturbing religious assembly. §297. Trespassing on burial places, etc §298. Uttering words, etc., with deliberate intent to wound religious feelings. §298-A. Use of derogatory remarks, etc., in respect of holy personages. §298-B. Misuse of epithets, descriptions and titles, etc., reserved for certain holy personages or places. §298-C. Person of Qadiani group, etc., calling himself a Muslim or preaching or propagating his faith. Pakistan’s Penal Code Section dates back to pre-partition India when it was introduced in 1860. Section 295, better known as the Blasphemy Law, deals with religious offences.

The law that is meant for countering misuse of the Blasphemy law is PPC 153 A (a), whoever “by words, either spoken or written, or by signs, or by visible representations or otherwise, promotes or incites, or attempts to promote or incite, on grounds of religion, race, place of birth, residence, language, caste or community or any other ground whatsoever, disharmony or feelings of enmity, hatred or ill-will between different religious, racial, language or regional groups or castes or communities” shall be fined and punished with imprisonment for a term that may extend to five years.

The blasphemy laws include a death penalty for the defamation of the Holy Prophet and life imprisonment for the desecration of the Holy Quran. However, the death sentence has never been implemented in blasphemy cases. Considering this factor, it is unlikely that Asia Bibi would ever be hanged.

Salman Taseer, the then Governor of Punjab province had visited Asia Bibi in jail and told her that he would take up her case with the then Pakistan President, Asif Ali Zardari. But shortly after he was gunned down by his frenzied guard, apparently because of his opposition to blasphemy laws. It can be said that Salman Taseer, s death was because of blasphemy law supporters, the murderer was garlanded and treated like a hero by extremist minded people.

Blasphemy law is a matter no political party in Pakistan is willing to touch, for this reason the politicians fail to educate the lesser educated masses from whom vigilantes emerge. It is this psyche which has to be changed, if they suspect somebody of blasphemy they need to collect evidence and go to the police and desist from taking law into their own hands.

Blasphemy law is a topic few are willing to discuss openly. By its constitution, the official name of Pakistan is the “Islamic Republic of Pakistan.” More than 96% of Pakistan’s 167 million citizens (2008) are Muslims. The first purpose of those laws is to protect Islamic authority. By the constitution (Article 2), Islam is the state religion. By the constitution’s Article 31, it is the country’s duty to foster the Islamic way of life. By Article 33, it is the country’s duty to discourage parochial, racial, tribal,sectarian, and provincial prejudices among the citizens.

Pakistan has been an active supporter of the campaign by the Organisation of the Islamic Conference to create global laws against blasphemy. Muslims feel victimized all over the world by a general attitude objecting on everything pertaining to Islam and some making obscene comments on Rasul Allah while Muslims never do likewise.It would not be wrong to say that in todays world ‘Muslim is the new Jew’.

Mutual tolerance is the key,we respect Christian and Jewish thought and religion, then why cant Islam be respected in a Muslim country?
Blasphemy law was enforced to make sure a modicum of respect is maintained within Pakistan which is an Islamic Republic.