Hiring a professional photographer to take close-up shots of your baby being born is the latest trend to arise out of the digital revolution and social media — transforming a traditionally behind-closed-doors event into something to be captured on camera and shared with a wider audience.

Demand for birth photography is just starting to catch on in Canada but it is a booming business in the U.S. where the International Association of Professional Birth Photographers, based in Austin, Tx., has signed up about 400 members, primarily women. It’s not a regulated profession.

The emerging practice is all part of how digital and social media have changed society, blurring the lines between public and private domains, says Dr. Randi Hutter Epstein, a New York City medical doctor, mother of four and author of Get Me Out: A History of Childbirth from the Garden of Eden to the Sperm Bank.

“What I think is behind it isn’t so much birth trends but societal trends where younger generations think what was once thought of as private is now public,” Dr. Hutter Epstein says. “So you go out to a bar and it’s on Facebook in 10 minutes and everything should be photographed because you just never know.”

She points to the phenomenon known as entertainment ultrasounds — throwing a party and inviting your friends and family to watch your fetal ultrasound, or live video-streaming it online — as another example of this phenomenon.

Some people seem to get into the business almost by accident.

Jaydene Freund was a doula, a birthing coach, who got into birth photography when a client asked her to take photos during a delivery.

Then Freund and a friend took turns taking photos of the births of each other’s children and now she specializes in birth photography, doing about two such shoots a month, which she says are emotionally rewarding, bonding experiences, for her as well.

“Back when I started in 2009 I was begging my friends to photograph their babies’ births, even offering to do it for free, and they still wouldn’t have me,” said Freund who is based in Vancouver.

“In the last year it has really taken off and my friends have regretted not having me because they can’t go back in time. I’m really busy and it’s become an industry.”

All the gory details

According to Freund who meets with clients beforehand to determine what kind of photos they want, people are just more comfortable with the birth experience these days.

“Some people want all the gory details but most don’t. They want to be able to share these photos with their father-in-law so I’m discreet about shooting body parts and creative in hiding nudity. Facial expressions are key.” 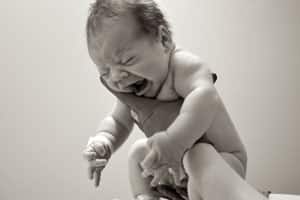 A photo of Thaeden Berg being held by a nurse shortly after his birth in 2011. (Jaydene Freund/Cradled Creations)

Kate Hood, a birth photographer based in Muskoka, Ont., generally only accepts past clients for birth assignments.

“It becomes difficult to shoot in such an intimate circumstance with a client I have no prior experience with so it’s important for me to develop a personal relationship with them to understand what their needs are,” she says.

The old standby of dumping the picture-taking duties on the father-to-be is just not fair, says Freund.

“He should be in front of the camera when he’s cutting the cord. Those are special moments and I don’t think it’s fair to have the dad behind the camera and have that extra duty because they have enough to do that day.”

Not to mention that some fathers can be so overwhelmed during the birth that they need medical attention themselves.

Freund recalls one dad who passed out, hit his head and had to go down to the emergency room to get stitches for his bleeding head.

“Like with any important event it can get messy when you ask a friend or relative to do it and you might not get the results you want. Professionalism is important,” says Hood.

Can be very romantic

Hood recently shot a client’s Caesarian section after getting permission from the woman’s surgeon and anesthesiologist.

“When I told people I was shooting a C-section they were floored. They said, ‘I cannot believe you get to shoot a surgery,'” she says.

“I had to stay well out of the way. I wasn’t able to shoot the prep for the surgery or any of the incisions being made but I was able to shoot the baby being taken out of mom, him being cleaned off and meeting mom for the first time.”

Hood was also not allowed to shoot anyone in the operating room who had not given permission such as nurses or attending physicians.

“For the most part, I don’t use flash or special lighting or extra equipment or assistants. The idea is to be as unobtrusive and take up as little room in the birthing space as possible.”

Hood has also photographed home births, which she says are much more unpredictable because vaginal births can happen at any time. They can also be more interesting because there is more freedom to shoot them.

Deborah Payge, a massage therapist in Burk’s Falls, Ont., had Hood photograph the birth of her son, James, six weeks ago.

“She arrived about 10 minutes before the birth. It was a very fast labour. It was fabulous. I barely even noticed her,” said Payge, 31.

“The pictures are beautiful; especially the ones in black and white actually look quite romantic.”

She emailed some of the “not too graphic” photos to family and friends, and plans to put a book together with the rest for her son, with before, during and after shots.

“It really is too bad we couldn’t do it for our first son because they are so magical and birth is such a powerful thing of love. I don’t think I’ve loved my husband more than during the birthing process and to see it from an outside perspective, it’s really quite lovely.”

Vicki Middleton had Freund photograph the birth of her son, Jaeger, last August while her sister videotaped it because she wanted to capture her and her husband’s first reactions upon seeing their firstborn.

She initially faced some opposition from family members who thought the idea was “totally bizarre.” They were later won over by the photos though her old-fashioned grandfather still refuses to see them.

“People think because it’s photographed, it automatically becomes public but that’s a misconception,” she says. “These photos can just be for you. You don’t have to put them on Facebook or in an album.”

A 28-year-old mom in Abbotsford, B.C., Middleton says that “for my next baby I want all the graphic shots, the whole kit and caboodle. Nothing can ever top giving birth and I want to see it all. It’s just the coolest thing.” 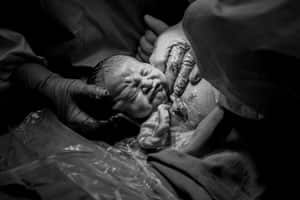 A photo of the birth of Sandy Cina’s baby by Cesarian section in April. (Kate Hood 2012)

Since birth photography is a relatively new phenomenon in Canada, hospitals here typically don’t have policies in place to deal with requests for it.

“We actually do not have a policy on that because we’ve actually never been approached about it,” said Lynn Sharples, a registered nurse who is clinical coordinator at Mount Sinai Hospital in Toronto, which handles as many as 6,800 births a year.

However, hospital guidelines do allow family and friends to take pictures with the verbal consent of the physician doing delivery and any health-care staff in the room. Nearly 100 per cent of families do take photos though usually they are of baby with mom after birth, Sharples said, adding rarely are they taking pictures of the baby coming out.

“We do allow photos we just don’t want it to hinder anything else going on in the room and it usually doesn’t,” she added.

“It’s is a very exciting time for women and I totally understand the rationale for wanting these pictures done. It’s very rewarding to be at the birth of an infant.”

Having professional photographers in the delivery room is just the latest evolution in childbirth, said Dr. Hutter Epstein who has chronicled the progression of birthing in her book.

“It’s gone from only having female relatives or midwives in the room and all men being outside including male doctors. You didn’t even want a male physician because it was embarrassing. It was considered obscene to let a male doctor see you naked with your legs spread apart,” she said.

“We went from dad in the waiting room handing out cigars to, not long ago, having fathers in the delivery room, which was considered a little racy in the beginning. And now, it’s like sure, we’ll hire a professional photographer.

“They’re in there taking pretty explicit pictures of you.”

In some ways, the trend shows how confident we are in childbirth that everything is going to be okay, Hutter Epstein adds.

“If you go back to when my grandmother was giving birth, they were still worried that they might not survive, so you want into the delivery room not thinking about the beauty and how can I save this cherishable moment. It was more I hope I survive, I hope the baby’s healthy and everything goes okay.”

On the one hand, Epstein says the whole idea of a professional birth photographer is “silly,” but she also thinks it might have been nice to have those photographs of her own children, though she’s not sure her 18-year-old would agree.

“The thought of a picture in our house of him coming out of my vagina, I think he’s thrilled we don’t have that picture.”

Just too many coffee shops around: Korea

Social Distancing: Tale of a Village

Brands to benefit from generating leads in a brand safe environment