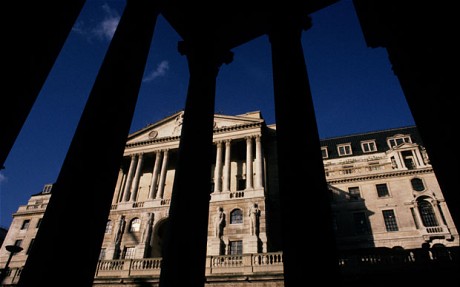 Sir Mervyn King, the Bank of England governor, hinted at further action to boost the ailing UK economy on Wednesday after Threadneedle Street slashed its 2012 growth forecast to zero and said inflation was back under control.

King said there was no urgent need for fresh stimulus but signalled more money creation through the Bank’s quantitative easing (QE) programme in response to an economic performance that has “continually disappointed expectations of a recovery”.

Against a backdrop of a worsening crisis in the eurozone and tighter lending conditions imposed by UK banks, the Bank’s quarterly inflation report cut its growth forecast for 2012 from the 1.25% pencilled in three months ago and believes the bounce-back in 2013 will be weaker than anticipated three months ago.

King said: “The overall outlook for growth is weaker than in May, reflecting downside news in the near term and, in the medium term, the possibility that the weakness in output and productivity growth that we have seen since the financial crisis persists. GDP growth is more likely than not to be below its historical average rate in the second half of the forecast period”.

The governor said it would not be until 2014 that activity returned to its pre-recession peak in 2008 and used an Olympic analogy to underline that recovery would be long and hard.

“Unlike the Olympians who have thrilled us over the past fortnight, our economy has not yet reached full fitness. But it is slowly healing. Many of the conditions necessary for a recovery are in place, and the monetary policy committee (MPC) will continue to do all it can to bring about that recovery. As I have said many times, the recovery and rebalancing of our economy will be a long, slow process. It is to our Olympic team that we should look for inspiration. They have shown us the importance of total commitment when trying to achieve a goal that may lie some years ahead.”

King said it would take a “bit of time” to assess the impact of the Bank’s new funding for lending scheme (FLS), which came into force last week and is designed to encourage banks to lend more at lower interest rates. Threadneedle Street announced in July a £50bn increase to £375bn in the size of its QE programme by November, and the governor said further purchases of government gilts to create money was “an option”.

On the foreign exchanges, the pound rose slightly after King expressed strong reservations about cutting the bank rate from its historic low of 0.5%. The governor said there was a risk such a move could prove counter-productive by making life more difficult for some banks and building societies.

Vicky Redwood, UK analyst at Capital Economics, said it would not take much to “tip” the nine-strong MPC towards further action. “We expect another £50bn (of QE) to be announced in November when the current purchases are completed.”

The governor strongly defended the Bank’s forecasting record against accusations that it had persistently been over-optimistic about the outlook for growth, pointing to a euro crisis that “goes on and on and on” for pushing up lending costs for domestic borrowers as the reason for the latest downgrade.

But King said tumbling inflation would eventually boost consumer spending by raising real incomes, while the funding for lending scheme was “bigger and bolder than any initiative so far tried to get the banks lending again”.

Labour seized on the admission in the inflation report that banks might use the FLS to inflate their profits rather than lowering interest rates, and said it was time for a Plan B.

Rachel Reeves MP, Labour’s shadow chief secretary to the Treasury, said: “With growth forecasts slashed yet again, not just this year but in future years too, it is clear that we cannot go on with the same failing plan from this government. The chancellor’s policies aren’t only causing short-term pain, but long-term damage to our economy too. And despite the crisis in the eurozone Britain is just one of two G20 countries in a double-dip recession.”

King said the Bank found it difficult to explain why the jobs market had been so resilient at a time when official figures have shown the economy deep in a double-dip recession. Threadneedle Street has lowered its longer-term growth projections for the economy in the belief that there has been permanent damage caused by the deepest and longest downturn since the second world war.

John Hawksworth, chief economist, at PricewaterhouseCoopers said: “It seems likely that we have entered a ‘new normal’ period where growth will be relatively subdued by historic standards for some years to come as the banking system remains impaired and global commodity prices remain relatively high and volatile.”