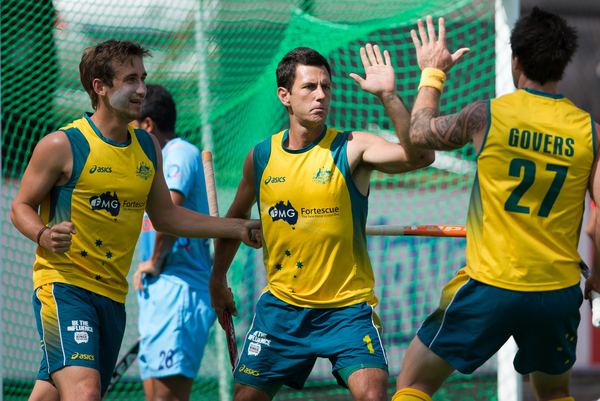 AFP – Australia went some way to erasing the pain of their London Olympics flop by winning a record fifth consecutive Champions Trophy in a 2-1 extra-time victory over the Netherlands on Sunday.

An early Dutch goal was cancelled out by Russell Ford four minutes before half-time, with the final going into golden point extra time.

Kieran Govers clinched victory with a brilliant field goal from the top of the circle five minutes into extra time to give the Kookaburras victory.

Five-times world player of the year Jamie Dwyer said it was the perfect response to the disappointment of finishing with the bronze medal at this year’s Olympics, after going in as strong gold medal favourites.

“After London the whole team was disappointed and we started having a few doubts go through our heads both as a team and individually. So to come back out and play like we did this week, it was very good,” Dwyer said.

“I thought it was a dominant performance. The first half we started really well and then we let them back in,” Reid said.

“We started to come good again at the end of the first half and then the second half we dominated but we just couldn’t put the ball in.”

“Australia played very good and it was their quality that we couldn’t play the game that we wanted to play. We were maybe lucky to get into the extra time. It was a well-deserved victory,” he said.

Although Australia controlled the opening stages, it was the Netherlands who struck first, with Sander Baart converting a penalty corner in the 18th minute.

Ford levelled the game four minutes before half-time. Australia then had a chance to take the lead but Dwyer missed a penalty stroke just before the break.

But in echoes of the Kookaburras’ unforgettable golden goal win over the Dutch at the 2004 Athens Olympics, Govers’s reverse stick shot from an Eddie Ockenden pass sealed gold for Australia.

Earlier Pakistan won their first Champions Trophy medal since 2004 when they defeated India 3-2 in the bronze medal match.

Pakistani champion Shakeel Abbasi said that for his team the win was as good as winning gold.

Indian midfielder Yuvraj Walmiki said despite losing, his team would take a lot away from the tournament.

“Coming out from the Olympics we finished 12th and now at the Champions Trophy, after the Olympics and World Cup it is one of the top tournaments so finishing fourth is a good achievement,” he said.

In the classification matches, Belgium pulled off a 5-4 upset against world number one Germany to claim fifth spot, while New Zealand defeated England 3-2 in the 7th-8th place playoff.