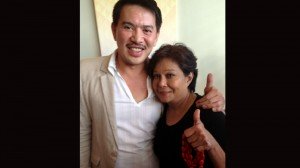 Mendoza and Aunor were clearly ecstatic about their movie’s latest triumph.

“After winning abroad, we hope our countrymen would become more curious to watch our films so that indie films will be recognized not only by foreigners, but by Filipinos well,” said Mendoza.

Founded in 2007, the Asia Pacific Screen Awards seeks to “recognize and promote cinematic excellence and cultural diversity in the vast Asia-Pacific region … and is considered as the region’s highest accolade in film.”

All APSA winners and nominees are inducted into the Asia Pacific Screen Academy. They are some of the most respected names in film from the region.

Aunor and Mendoza were informed of the good news while at the Philippine premiere of “Thy Womb,” held during the second Sineng Pambansa at the SM Lanang in Davao City.

They chose to hold the local premiere of “They Womb” in Davao because the film was set in Tawi-Tawi.

Both Aunor and Mendoza fell in love with the island-province and have dedicated the film’s many triumphs to its “gentle, peace-loving” people.

APSA celebrates “the finest, bravest and most audacious cinema in the region,” according to its web site.