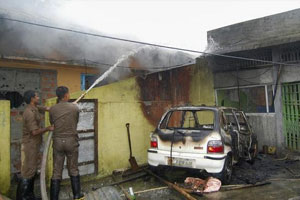 Four more persons fell victim to the fresh wave of violence in lower Assam districts, triggering protest by locals who blocked National Highway 31 at Beltoli on the Kokrajhar-Dhubri border on Tuesday.

With four more people being killed, the death toll in the ethnic violence in Assam has climbed to 65.

In the worst-affected Kokrajhar district, three persons were killed and two others injured when some persons opened fire on a group of people at Ranibuli village late Monday night.

The two injured were rushed to Guwahati Medical College and Hospital.

To protest the killing of the three persons who allegedly belong to the minority community, a group of 500 people blocked National Highway 31 at Beltoli.

Indefinite curfew has been reimposed in Kokrajhar district while round-the-clock curfew continues in neighbouring Chirang district where one more body was found early Tuesday morning. The body was recovered from a field in Rajapara area, senior police officials said.

A few houses were burnt down in Chirang but timely action of police prevented any major violence Monday night, Mr. Bishnoi said. A person has been arrested in this connection.

The Army continued flag marches Tuesday morning in the three districts of Kokrajhar, Chirang and Dhubri, hit by clashes between Bodos and Muslims.

Meanwhile, a five-year-old in the Chhatipur LP School relief camp in Chirang died allegedly due to lack of timely medical attention, camp inmates said. The child had been unwell for the past five days. With this, the number of people who have died in the relief camps has risen to 14.