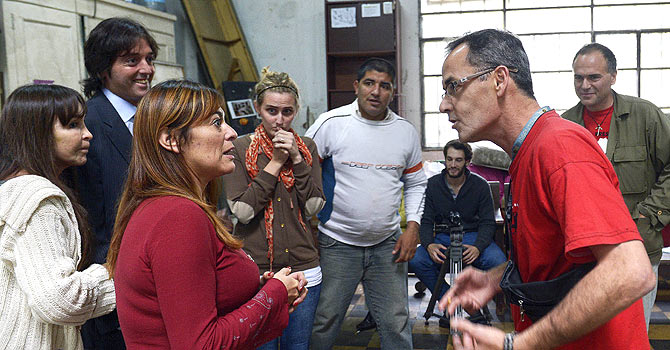 BUENOS AIRES: Hundreds of patients at Argentina’s biggest mental hospital are turning fine arts training into real ability as painters, actors and musicians, and getting a fuller sense of self along the way.

“Art really can be a tool for change in society. And you can see its effects, because art can heal people,” said Mirtha Otazua, a psychologist and coordinator of an acting workshop at Jose Tiburcio Borda Mental Hospital.

The facility in Buenos Aires is home to 700 inpatients, all male, on a sprawling and gritty 19-hectare (47-acre) campus where efforts are afoot to change a system that has long kept such patients cut off from both the world and their own potential.

Nobody is a bigger believer in the program’s prospects for changing lives than its director, Alberto Sava.

“The creative process, in and of itself, has some major positive effects,” Sava said.

“But our workshops are also turning out musicians and artists of quality” performing or showing in theaters, galleries, festivals and schools outside Borda, he said.

Sava sports a white beard and exudes a gentle demeanor despite being faced with crowding and facilities that have likely not been upgraded since the hospital opened in 1865.

Sava’s involvement in art dates back to the 1980s, when there was an effort – ultimately unsuccessful – to shut down asylums in the hope that patients would improve if they were better integrated in society at large.

As mental health care settled back on a more traditional course, Sava struck on the idea that fine arts could provide patients with a therapeutic focus.

Now, in addition to serving as a social psychologist, Sava is in charge of acting and mime as the founder of the Borda Artists Front, a radical name for a simple idea.

“There are so many inpatients here with artistic potential. You can see it in the people out on the terrace playing guitar, in the quality of painting and graffiti on the walls and in the poetry they actually sell in the hallways,” Sava said in his tiny, cluttered office at the hospital.

He coordinates 13 workshops in theater, mime, literature, circus, music, painting and sculpture that bring together inpatients, outpatients, hospital staff, medical students and neighbours of the facility.

In one of the groups, patients and volunteers reverse roles, with the patients pretending they are the medical staff.

For artist Oscar Ciancio, who is affiliated with the program, there is an important, clear goal.

“We see how the fact that (patients) can produce art of solid quality helps change the rest of the world’s understanding of what mental illness is,” he said.

“When patients work on a piece, they emerge from their confinement and begin to discover who they are,” he said, adding that “most have no reason whatsoever to be locked up, but many have been in here for 20 years.”

In many cases, relatives refuse to take their loved ones back in, while others say they cannot afford to care for them. Some patients who could live alone are unable to find a job or housing.

Hospital director Ricardo Miguel Picasso stressed the importance of the art program for patients who have been abandoned by their families and the rest of society.

The artists’ group also calls attention to what it says are some hospital policies that treat patients as second-class citizens.

Sava, with more than three decades behind him in the system, says he hopes these are the dying days of Argentina’s “insane asylums”.

“Insane asylums, public or private, are places that violate human rights,” he said.

“That means they offer poor quality of life, poor nutrition, poor clothing, overmedication is the norm, and there is physical and psychological violence. They are like concentration camps.”

Some system changes are in the works.

Though the 1980s campaign to shut down asylums fizzled, a 2010 law – that has yet to be fully detailed and implemented – could change the mental health care landscape dramatically.

The new law, aiming to break old taboos and stigmas, calls for mental patients not to be treated in confinement but rather in general public hospitals.

With more than 40 million people, Argentina has 22,000 mental inpatients in public and private facilities, according to Sava.