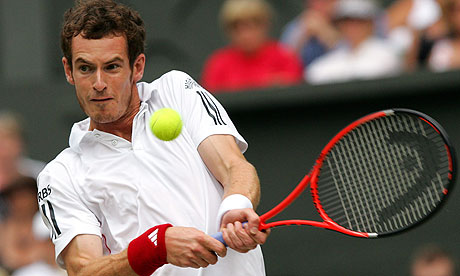 Oh, the ecstasy. Andy Murray has done it. Finally. At last.

He stormed into the Wimbledon final for the first time yesterday amid scenes of wild jubilation.

The nation has waited 74 years for a British finalist in the men’s singles – and now we must wait again to see if he can beat Roger Federer tomorrow.

Murray shed tears of joy after winning a nail-biting semi-final that left fans on the edge of their seats.

On Centre Court – all too often the graveyard of his and other British players’ ambitions – he wrote himself into the history books by beating Jo-Wilfried Tsonga in four sets.

It was in 1938 that a Briton, Bunny Austin, last made it to the men’s final at Wimbledon. Eleven others have fallen at the semi-final stage since then, with Murray having lost in that round for the last three years on the trot.

Now the nation awaits excitedly to see if the 25-year-old Scot can be its first champion since Fred Perry 1936. Record television audiences are expected and Britain will come to a standstill when he faces six-times Wimbledon champion Federer.

Murray, who led the semi by two sets to love then faced a tough fightback from his French opponent before eventual triumph, described his feelings at reaching the final as ‘a bit of relief, excitement’.

‘It’s tough to explain,’ he said. ‘It was such a close match in the last two sets. I’m happy to be through.’

If Murray wins the final, he will, in this the Queen’s Diamond Jubilee year, also become the first British man or woman to win a Wimbledon singles title since Virginia Wade – who managed it in the Silver Jubilee year of 1977.

The Queen has been following Murray’s run to the final, but Buckingham Palace said last night she will not be able to attend the final because of ‘long-standing private engagements’ this weekend.

The Duchess of Cambridge will be in the royal box tomorrow, St James’s Palace sources told the Daily Mail, but her husband Prince William has ‘prior private commitments’.

David Cameron wished Murray good luck as it was announced No 10 will fly the Saltire alongside the Union Jack tomorrow in support of him.

The Prime Minister said: ‘It is great news that we have our first home-grown men’s finalist at Wimbledon for over 70 years, especially in this exciting Olympics year when the eyes of the world are on the UK. I’ll be watching the final and like the rest of the country, will be getting right behind Andy Murray. I wish him the best of luck.’

Yesterday Murray was watched from the royal box by Prince Andrew – who left ten minutes before the end – Kylie Minogue and Sir David Frost. More than ten million watched on television.

Murray’s mother Judy and girlfriend Kim Sears saw every second from the players’ box. Miss Sears cried when he won; Mrs Murray hugged everyone in sight, including her ex-husband  Willie.

3 Responses to “Andy Muray : British man to play a Wimbledon final for 74 years”