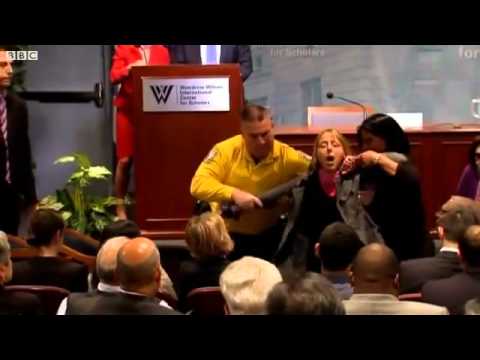 A 40-member American peace delegation is leaving for Pakistan next week to protest drone strikes and promote peaceful relations between US and Pakistan, it was announced on Friday.

The delegation, organised by the activist group CODEPINK, a group of women peace activists, will meet with the families of drone victims, lawyers, academics, Pakistani politicians and US officials.

On October 7, they will march to South Waziristan in Pakistan’s Federally    Administered Tribal Areas (FATA) to protest US drone strikes that have killed more than 2,500 people, including civilians, CODEPINK said.

The protest comes in the wake of a scathing report by New York University and Stanford lawyers that details how drone warfare affects citizens and humanitarian workers in Pakistan.

CODEPINK is a women-initiated grassroots peace and social justice movement working to end US funded wars and occupations, to challenge militarism globally, and to redirect resources into health care, education, green jobs and other life-affirming activities.