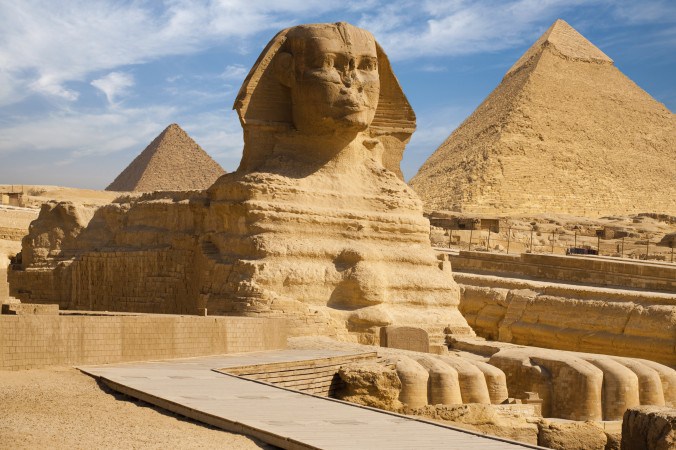 One thing on many people’s bucket lists is seeing the 7 Wonders of the World. Unfortunately, only one of the wonders still exists as it once did. The original list was created around 200 B.C. Most of those wonders were destroyed in the 2,200 years that passed.

Recent attempts at creating a new list, such as the 7 Wonders of the Modern World, include such boring and non-exotic entries as the Empire State Building. To help, we will present a list of 7 wonders that are amazing, historic and exotic as good alternatives to fill in the gaps in the original list. Visit all 7 for an amazing bucket list vacation.

The Pyramid of Giza

The Pyramid of Giza is the only one of the original 7 Wonders of the World that still stands as it did in ancient times minus its original smooth casing. It is also still an amazing technical feat of ancient technology. It is both the oldest and largest pyramid built over a period of decades at around 2560 BC. It is 481 feet tall, and you can find it ten miles south of Cairo. Miniature pyramids and papyrus scrolls are excellent choices for souvenirs on this stop.

The Remains of the Mausoleum of Halikarnassos

While some sites of the destroyed original wonders cannot be safely visited, ancient Babylon in Iraq for example, you can still see some of the remains of the original Mausoleum of Halikarnassos that once stood in what is now Turkey before it was destroyed by earthquakes. Just visit British Museum’s Room 21 in London. This exhibit includes amazing statues and relief slabs from the original structure. Photographic prints and postcards of the statues are available in the gift store.

The Ancient Temples of Greece

While some minor remains of the other 7 Wonders can be found, it’s perhaps best to move on to still standing structures so that your sense of wonder is kept in awe. Thankfully, there are excellent substitutes for original wonders like the Temple of Zeus and Artemis due to the fact that other Greek temples still stand. We suggest visiting three in particular, the Parthenon in Acropolis, the Temple of Hephaestus in Athens and the Temple of Apollo Epicurius in Peloponnese. Authentic Greek olive oil is a great choice for an affordable souvenir.

The Colossus of Rhodes unfortunately no longer exists. Still there are other even more ancient statues you can witness in your lifetime. One of the best and most exotic choices is the Moai, the Polynesian statues of bizarrely shaped human heads that exist on Easter Island. 887 of these statues still exist, and the largest weighs in at 86 tons. You can purchase miniature replicas of the statues from local Polynesian artists.

The Great Wall of China

Most people think the Great Wall of China was one of the 7 Wonders of the World. While it wasn’t, it’s probably actually more remarkable than any item on the original list. This amazing wall was built by different emperors from 221 B.C to 1655 A.D. It is an astounding 13,171 miles in length. The most famous sections of the Great Wall can be visited in the cities of Badaling, Jinshanling, Mutianyu and Simatai. For a souvenir, we suggest purchasing an authentic Chinese silk tapestry.

Petra is an ancient city in Southern Jordan that features astounding architecture that was carved right out of tall cavern walls around 500 B.C. Make sure to visit the Treasury, which was used as an amazing location shoot in Indiana Jones and the Last Crusade. We suggest buying a hand woven rug from one of the local artisans. Just be careful how you do the rug cleaning with such a valuable souvenir.

Easily one of the most impressive and iconic structures in the world, the Taj Mahal is a gigantic mausoleum with a distinctive dome and minarets that was constructed out of white marble in Agra, India in 1643. It houses the tombs of Emperor Shah Jahan and his favorite wife, Mahal. For a souvenir, we suggest purchasing authentic Indian curry powder.