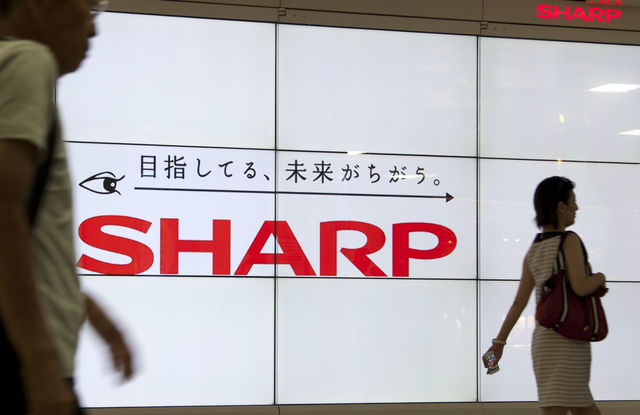 OSAKA — Sharp Corp. is thinking of doubling its job cuts to around 10,000, or nearly 20 percent of its workforce, to turn around its struggling business, sources said Saturday.
The move is the latest in a slew of steps reportedly being taken by the Osaka-based electronics maker to offset major losses from its slumping television business and streamline its 57,000-strong workforce, the sources said.

Sharp announced earlier this year that it would slash about 5,000 jobs in and outside Japan by the end of the business year to next March via early retirements and other means.

In addition, it is considering spinning off a plant in Kameyama, Mie Prefecture, that makes liquid crystal display panels for smartphones to secure operating funds through investments from other firms.

It may also sell its air conditioner and copier units, downsize domestic TV assembly operations, and sell off stockholdings in other manufacturers as part of the restructuring push, which could see its TV plants in Nanjing, China, and Mexico sold to Taiwanese business partner Hon Hai Precision Industry Co., better known as Foxconn.

Earlier reports mentioned talk of the company selling a key solar cell plant in Sakai, Osaka Prefecture, to bolster its finances. The plant produces thin-film solar cells for large solar power plants, but the business is losing money amid falling prices and fierce competition from other Asian rivals.

The company is also considering selling some of its real estate assets in the Kanto region, including the Ichigaya building in Shinjuku Ward, Tokyo, and the Makuhari building in the city of Chiba, the sources said.

Amid the belt-tightening, Sharp is trying to secure a credit line and is negotiating to borrow ¥60 billion to ¥70 billion from its main banks to refinance short-term loans that fall due shortly, sources said earlier.

The need for bridge loans from Mizuho Corporate Bank and the Bank of Tokyo-Mitsubishi UFJ emerged amid widespread expectations that Hon Hai’s investment will turn out to be smaller than agreed after Sharp’s share price plummeted recently, according to the sources.

Hon Hai agreed in March to buy a 9.9 percent stake in Sharp for ¥550 per share, but the two companies have been discussing a lower price in light of the stock plunge, which was triggered when Sharp reported huge losses.

Sharp was originally hoping to raise ¥66.9 billion in investment by the Taiwanese company. In addition to cutting the purchase price, however, Hon Hai is reportedly looking to double its stake in Sharp, which appears reluctant to comply.

For the April-June quarter, the company reported a ¥138.40 billion net loss that was nearly triple the ¥49.28 billion loss it posted the previous year. Sales totaled ¥458.60 billion, down 28.4 percent, as revenue from LCD television and other products declined.

The net loss estimate for the full year was revised downward from an earlier projection of ¥30 billion to reflect the first quarter losses and deepening restructuring costs.