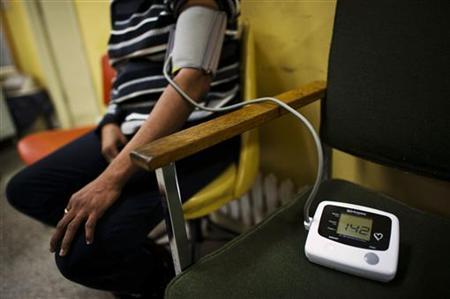 Imagine all the people in Canada, and suppose every last one of them had uncontrolled high blood pressure. That’s the situation in the U.S., the Centers for Disease Control and Prevention says, with 36 million people having high blood pressure that’s not being managed.
Because of that, “High blood pressure is public health enemy number two,” CDC director Dr. Thomas Frieden said during a recent press briefing (if you’re curious, number one is tobacco).
The CDC released a Vital Signs report today that detailed, with startling statistics, how prevalent high blood pressure has become in the U.S., and why it’s gotten out of control. Some 67 million Americans have high blood pressure, 53 million are aware of that fact, 47 million are being treated and 31 million have it under control.
MORE: Hospitalizations Rise for Kids With High Blood Pressure
That leaves 36 million people who don’t have a handle on their condition, which can cause stroke, kidney failure and heart attacks and is responsible for about 1,000 deaths per day. The agency defines high blood pressure as a reading of 140/90. Normal is 120/80.
The problem, Frieden explained, isn’t finding a solution—several medications and lifestyle interventions such as losing weight and exercising work great at lowering blood pressure and keeping it under control.
The problem is in synching up healthcare with patient responsibility. Of those 36 million with uncontrolled high blood pressure, 26 million saw a doctor at least twice in the previous year, and about 16 million know about their blood pressure and are being treated. But that treatment isn’t enough to keep them out of the danger zone.
MORE: Rejoice, Chocoholics: Men Who Eat Chocolate May Have Lower Stroke Risk
Still another 14 million don’t know they have high blood pressure. Frieden’s theory: “They may not have been told. Some of them may never have been in care. I suspect that a great majority have actually had a measurement of high blood pressure before the examination in this survey. Some of them may have been told and forgotten.”
Then there are those, Frieden added, who live in denial about having to take medication daily, maybe for the rest of their lives, and who hope things get better on their own.
But the CDC is not leaving people without help. Tomorrow kicks off a new program, “Team Up. Pressure Down,” a nationwide program from the CDC and the Surgeon General that’s focused on lowering blood pressure through pharmacist and patient participation.