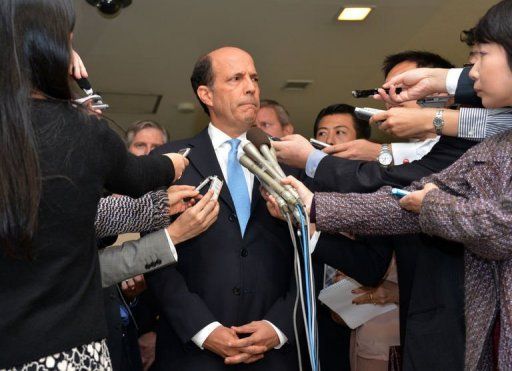 U.S. Ambassador to Japan John Roos moved into damage-control mode Friday for the second time in a month after a soldier allegedly attacked a schoolboy in Okinawa.

Roos appeared in front of television cameras pledging full cooperation after claims that a drunken serviceman broke a curfew and hit a 13-year-old in a private home.

“Let me be absolutely clear. I am very upset, it’s an understatement to say I am very upset with the reported incident in Okinawa,” Roos told reporters after being summoned to the Japanese foreign ministry in Tokyo.

Less than three weeks ago, a teary-eyed Roos told Okinawans he shared their “anger” after two U.S. servicemen were arrested over the alleged rape of a local woman on the island.

That incident led to a nationwide nighttime curfew for all service personnel in the country as U.S. authorities moved to try to neutralise a potentially explosive issue.

Okinawans, the reluctant hosts to more than half of the 47,000 soldiers, sailors and airmen stationed in Japan, are seething about the huge U.S. presence on their semi-tropical island chain.

Crimes committed by servicemen have tended to act as lightning rods for protesters who want their bases shut.

Roos was called in by Vice Foreign Minister Shuji Kira after a 24-year-old serviceman entered an apartment above the pub where he had been drinking and punched a teenage boy, Okinawa police and reports said.

He kicked and destroyed a television before jumping out the third-floor window in the village of Yomitan, they said.

The soldier, who allegedly became violent at the bar before the incident early Friday morning, was taken to a U.S. military hospital at the Kadena air base where he was treated for his injuries, they said.

“Police are investigating the case, in which the man could be charged for trespassing, injury and destruction of property,” said a local police spokesman. “But the man is still in a U.S. military hospital,” he said.

Prime Minister Yoshihiko Noda said the alleged crime was “extremely regrettable” and should never have occurred.

Foreign Minister Koichiro Gemba described the alleged incident as “inexcusable”, and said “it is outrageous that he went out at all” in light of the curfew.

Okinawans reacted furiously, with the local Okinawa Times daily issuing a special edition reporting on the alleged incident, while the island chain’s governor lashed out at the U.S. military.

“It’s not we who are causing cracks in the Japan-U.S. security pact and alliance. It’s they who are doing it,” said Hirokazu Nakaima.

Roos said the good work of the many in the US military was undermined by the actions of a minority.

He paid tribute to U.S. troops “away from their homes that are here for the defense of Japan and that serve so ably in maintaining peace and security in this region of the world that is so important for all of us.”

“It is incredibly unfortunate that the purported actions of the few reflect badly on thousands of young men and women here in Japan.”