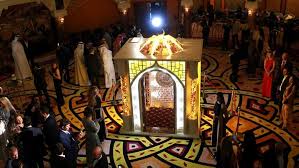 While the UAE is dotted with beautiful, lavish mosques across the emirates, imagine having a private one in your own backyard or garden, or in your office. Dubai was introduced to a novel concept of a ‘precious little’ portable mosque on Thursday night by the Amber Palm group. The mosque is 75% made of ancient gem stone amber and costs up to a million dirhams and can be constructed in about 4 to 5 hours. The first display model can have only two people pray at a time, however, the group aims to customize the mosque depending on the requirement of the buyer.

The Amber stone Mosque is the world’s first ever portable and its first installation was launched at a gala exhibition event at the Burj Al Arab hotel on Thursday evening. The selected gathering included members of the royal family, ambassadors, heads of government departments and CEOs of major companies.

“People have the idea that amber is used only in jewellery, so this was our way of innovating and also educating people about the unique characteristics and healing power of this rare stone,” Andrew Sunko, Amber Palm operations manager told Khaleej Times.

The mosque was designed using geometric Mashrabiya patterns as well as traditional Arabic influences. The lighting has been specifically designed to make the best use of the translucent quality of the amber pieces. Each piece of amber is backlit to show the beauty of the stone and giving a warm, rich luxurious feel.

The launch also saw an exhibition of rich paintings and portraits of the UAE leaders made from crushed amber stones…. see more